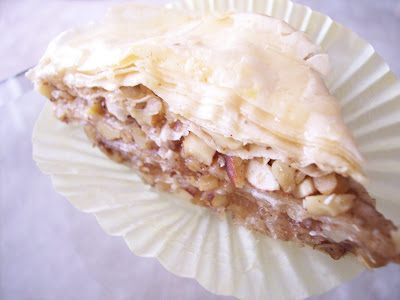 Any attempt that I make - no matter how perfectly detailed or thoroughly descriptive - to convey the sheer deliciousness of this dessert will undoubtedly fail. And this is coming from someone who isn't even a "dessert person." 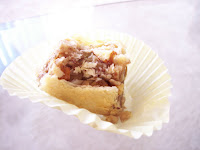 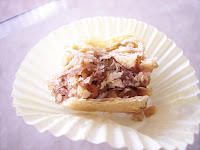 1.) Preheat oven to 325 degrees F. Spray bottom & sides of a 9 x 13 in. pan with non-stick cooking spray.
2.) Boil sugar & water until sugar is melted. Then add vanilla & honey (or agave nectar), simmering for 20mins.
3.) While sugar mixture is simmering, chop nuts into small pieces & mix with cinnamon in a large bowl. Set aside.
4.) After sugar sauce has simmered for 20mins., remove it from heat & allow sauce to cool. (It is set aside to be used after the baklava has finished baking.)
5.) Carefully unroll phyllo dough. Cut the entire stack in half using a sharp knife or a large pizza cutter, so it will fit snugly in the pan. Keep remaining phyllo dough covered with a piece of wax paper & a damp kitchen towel while you work, so it doesn't dry out & crack.
6.) Place 2 sheets of dough in the pan, & use a cooking brush to butter it thoroughly. Repeat this process 3 more times so that you have 8 sheets layered in the pan.
7.) After layering 8 sheets, sprinkle 3 Tbsp. of nut mixture on top of the stack. Then, return to the layering technique (2 sheets, then butter) adding 3 Tbsp. of nuts between each layer of two sheets. You will create a pattern of 2 sheets of dough, followed by butter, followed by 3 Tbsp. of nuts. Continue like this until only 8 sheets of phyllo remain.
8.) Layer the remaining 8 sheets in groups of 2, followed by butter, this time leaving omitting the nuts. This is exactly the same is the technique used for the initial 8 pieces of dough that were layered in the bottom of the pan.
9.) Next, use your knife/pizza cutter to cut baklava into diamond shapes. Cut all the way to the bottom of the pan, making 4 long, vertical rows, followed by individual diagonal cuts.
10.) Bake pastries for 50mins., or until golden brown.
11.) Once the baklava has finished cooking, remove it from the oven & immediately spoon the cooled sugar sauce over top of it.
12.) Allow dessert to completely cool before serving.
Tip: Serve the baklava in small muffin/cupcake cups & refrain from covering the dessert so that it does not become soggy. You can also freeze the leftovers in ziplock bags. 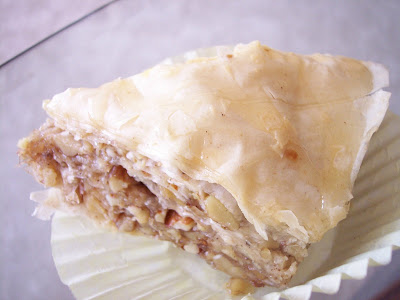