Fine, fine. I know this isn't the most beautiful picture in the world - it's not like every meal can be as pretty as a bowl of Couscous + Black Bean Salad - but I couldn't let that stop me from posting it here. (Although I'm still not sure what made me think that veganizing a traditional, English, meat-based dish was a good idea...) 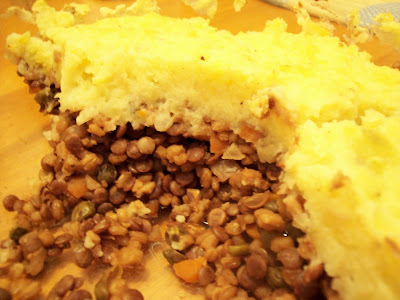 Anyway, despite appearances, this Vegan Shepherd's Pie is quite tasty. It's also really hardy, which makes it great for those times when you're craving something extra-filling. (That also makes it a nice dish for those who are non-vegetarians.) Although the lentil/nut mixture is flavorful, the mashed potato topping is definitely my favorite part of the meal. And while I've never actually had a traditional Shepard's Pie before, I do feel confident in saying that my veg pie fits the bill for "comfort" food.

So, don't be too quick to judge a book by its cover (or in this case, a meal by its picture). I'm sure glad that I wasn't.

1.) Preheat oven to 350 degrees.
2.) In a large sauce pan, over medium-low heat, simmer lentils, barley, yeast extract, & veg broth for 15 mins.
3.) After 15 mins., add carrot, onion, garlic, & walnuts to the lentil pot, simmering for 15 mins. more. If the mixture starts drying out, add a splash or two of additional veg broth.
4.) Combine the flour & water, & stir it into the mixture, simmering until thickened.
5.) Season the mixture with salt & pepper. Remove pan from heat, & add the peas & corn.
6.) Pour the mixture into a 2 Qt. casserole dish, spooning the mashed potatoes on top.
7.) Bake for about 30 mins., or until the potatoes are lightly browned on top.