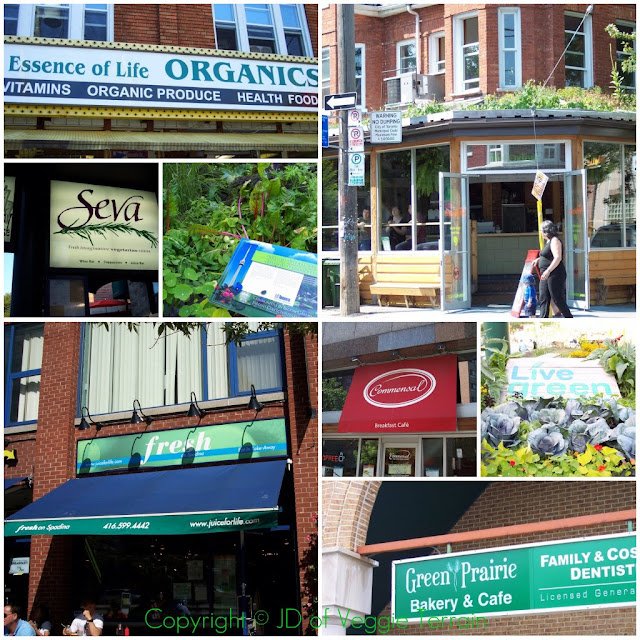 Despite all appearances to the contrary, I'm not attempting to capture the title of "most idle vegan food blog known to man." It just seems as though life occasionally (frequently) gets in the way of blogging - I know, I know, shocking stuff...

As a result of my long absence, I've decided to post a ton of food-porn pics from places that I've visited, like San Antonio, Texas (where I just returned from my younger brother's Air Force Basic Training graduation); Toronto (where CH and I spent a lovely vaca last summer); and Chicago (the place I nearly call home).

Hopefully all of these pics will make up for my lack of posting during the past few months. I mean, they do say a picture's worth 1,000 words right? So, this should pretty much cover it... 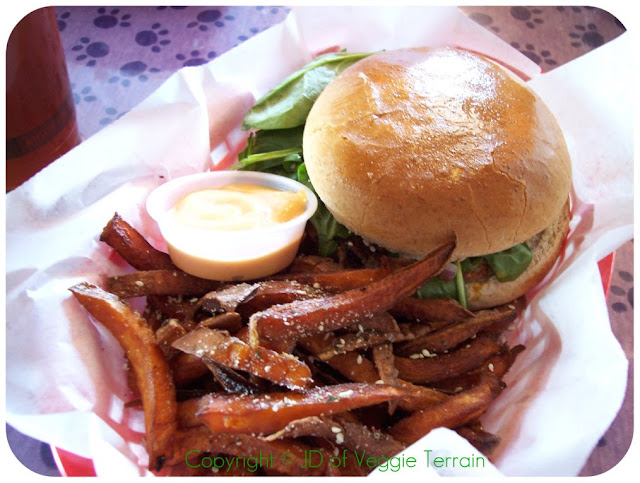 Ah yes, San Antonio... I'm not ashamed to admit that I was a little bit apprehensive about visiting Texas, especially after reading a restaurant review describing the general attitude towards vegetarianism as: "Yea, just pick the bacon off." There was that, and my persistently unfounded fear that George W. Bush could be lurking around any given corner during my stay. Highly unlikely, but enormously frightening nonetheless.

Happily, I neither encountered "W.," nor a surly, anti-vegetarian, bacon-obsessed waiter. In fact, I ate just fine in Texas, which was quite a relief. Pictured (above) is a veggie burger from The Cove, which despite tasting only so-so, looked quite ravishing.

Below, you'll see a collage of falafel and Indian food, which are two of my very favorite things. The falafel pictured in the bottom left corner is from San Antonio's only entirely vegetarian restaurant, Green Vegetarian Cuisine. Not only was their falafel amazing (despite being grilled instead of fried), but the vegan taziki sauce that came with it was RIDICULOUS. Like, so ridiculous that I came back to the restaurant the very next day, ordered the very same thing for carry-out, and wasn't even slightly embarrassed about it. Seriously. 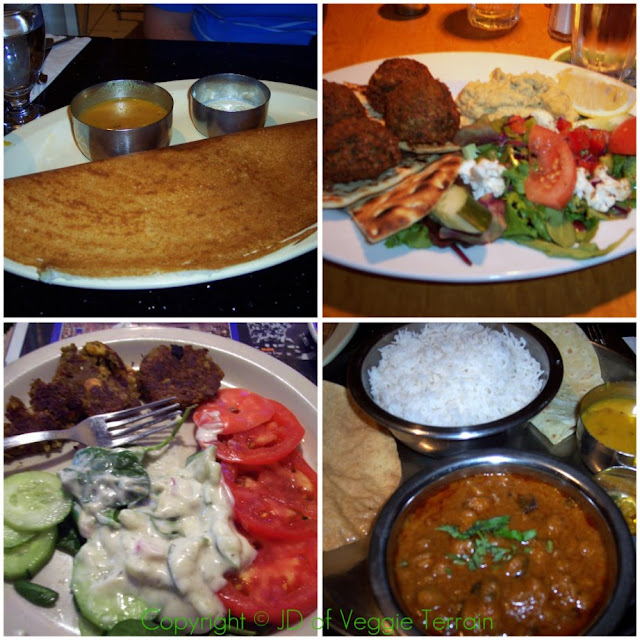 The other falafel plate pictured in the photo, above, is from C'est What?, a brewpub that CH and I took a shine to during our first trip to Toronto several years ago. Also pictured is some of the delicious food (masala dosa and chana masala) that we had at the vegetarian Udupi Palace, which is located in Toronto's very cool "Little India" neighborhood, east of downtown. 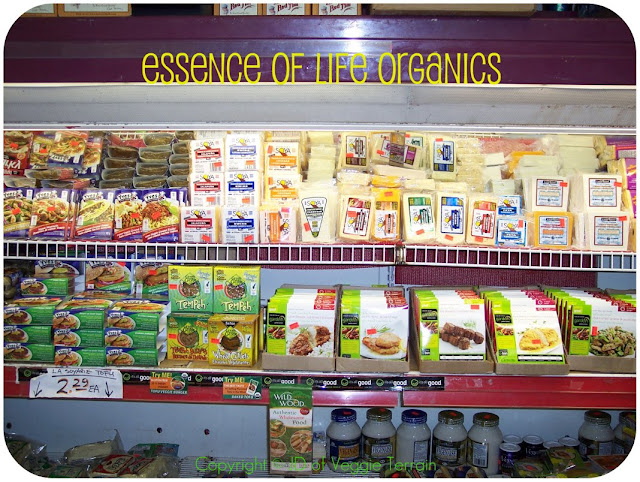 While traveling, one of the things that I look forward to (read: am obsessed with) most is visiting grocery stores. As a result, I was pretty excited to stumble across Essence of Life Organics in the Kensington Market neighborhood of Toronto. They carried all kinds of vegan goodies, as well as organic produce, vitamins, and other essentials... 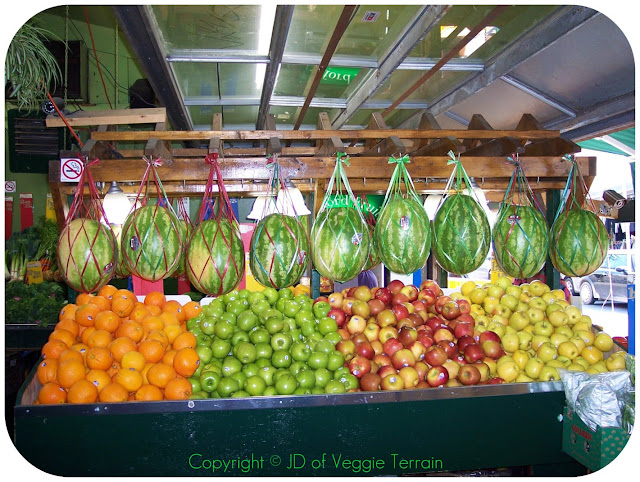 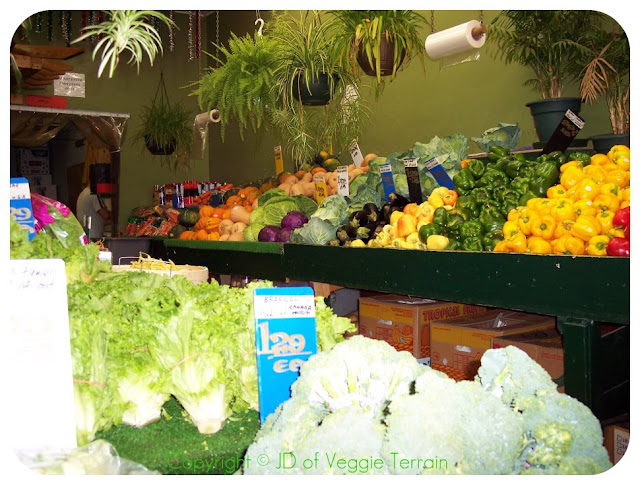 Another fantastic Toronto food find was Commensal, an entirely vegetarian restaurant with there buffet lines: hot, cold, and dessert. And because I've loved buffets since I was little - there was something so inherently satisfying about picking out exactly what/how much of each food I wanted on my plate - this place definitely rang my bell. 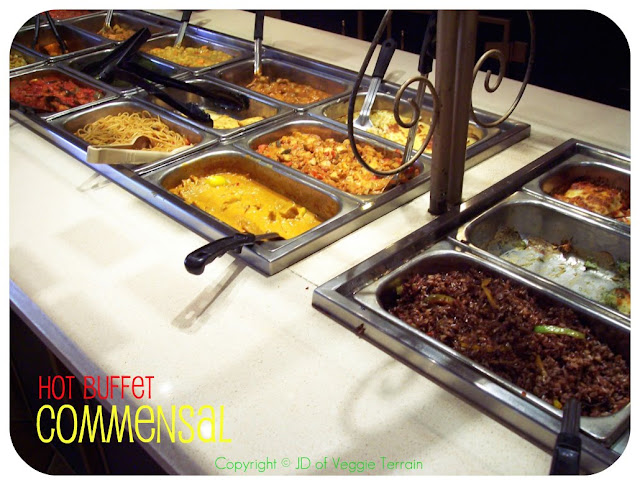 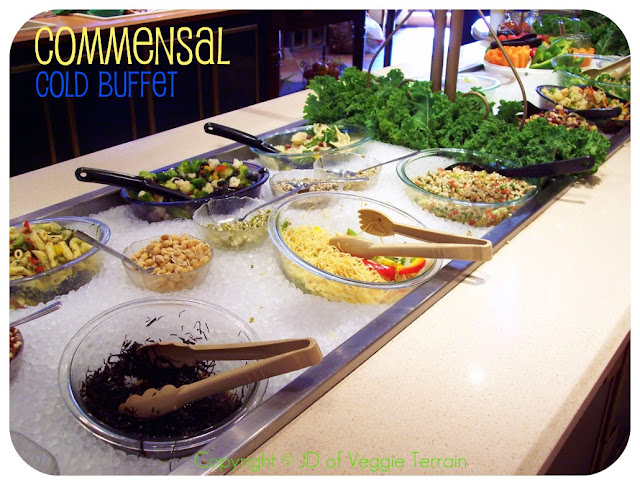 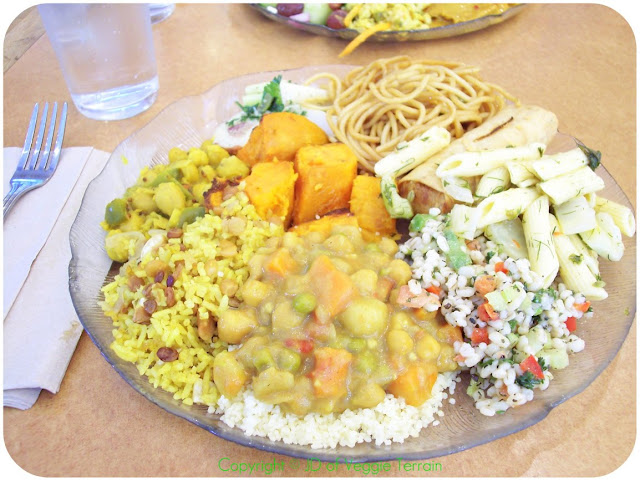 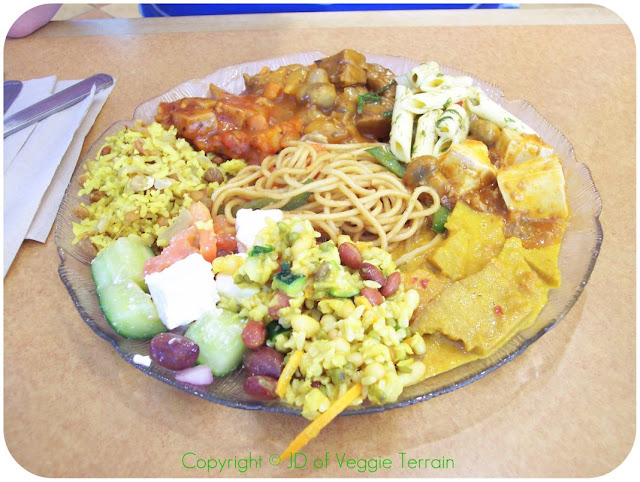 The first plate pictured is mine; CH's is the second one. It's apparent that my eyes were a bit bigger than my stomach (see below), but I have no regrets. 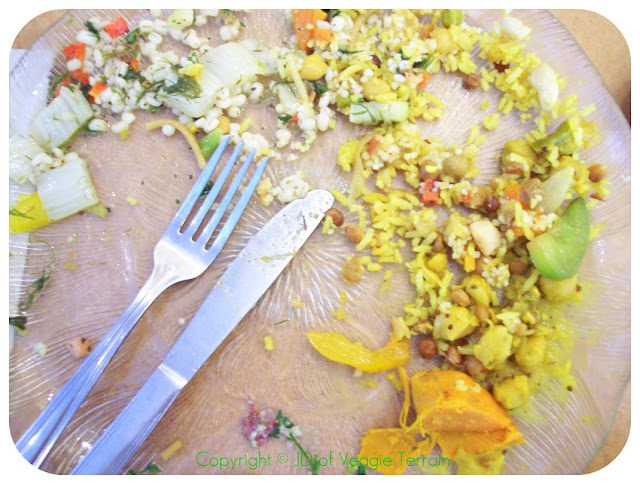 By this point, you might be wondering exactly what we had to drink - or, more precisely, how the beer was. This is Canada after all. Don't worry, we visited plenty of breweries, holes-in-the-wall, and snooty bars, alike. (Think Mill St. Brew Pub, Brass Taps Pizza Pub, Steam Whistle Brewery, Bar Volo, The Granite Brewery, and more.) Pictured below, is evidence of that fact. 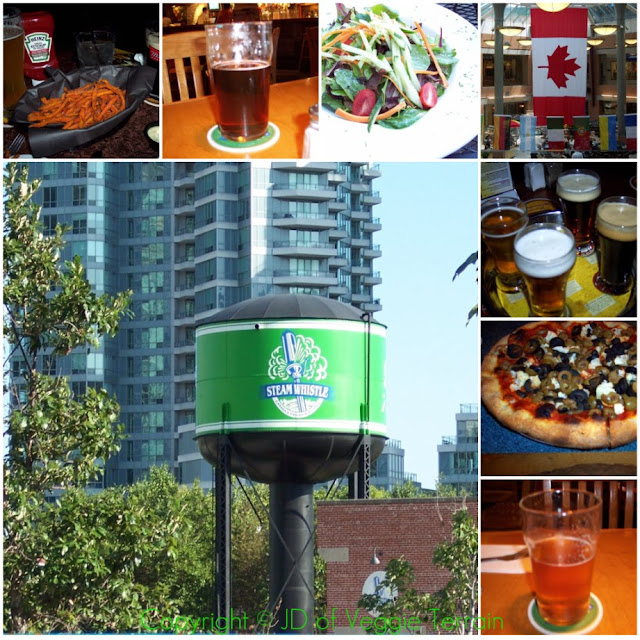 And, while we're on the subject of beverages, I should probably also cover the amazing lattes (both hot and cold) that CH and I enjoyed on our trip. The ubiquitous Second Cup - where I'd fallen in love with maple lattes during my pre-vegan days - was basically our mainstay; Lit Espresso Bar was a lovely treat; and Bulldog Coffee harbored a "meh" latte that honestly wasn't impressive enough to justify the attitude of its uber-rude staff. 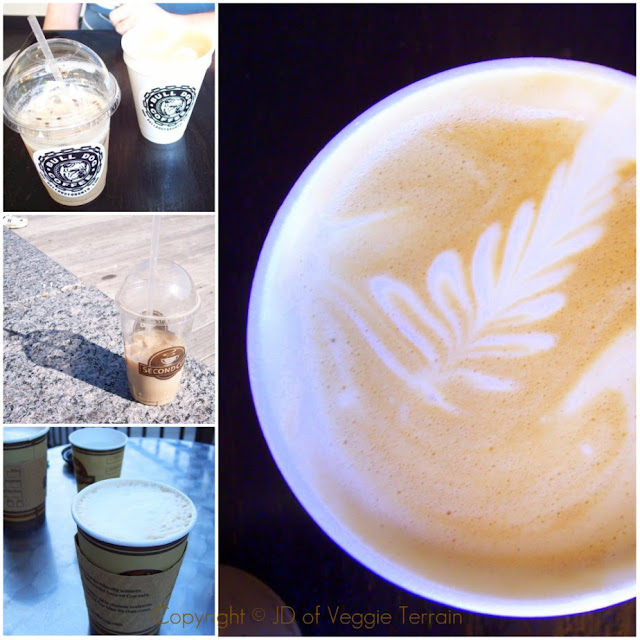 While out and about one day, we happened upon one of the restaurants that had been on my list since we first decided to drive to Toronto: Urban Herbivore. I could never get the restaurant's website menu to open before we left, so I wasn't quite sure what to expect. (Usually, I like to have some idea of what's on the menu first - considering that whole vegan thing - however, I figured that any place with the word "herbivore" in its name was probably a safe bet.) Fortunately, it was delectable! I had a sandwich filled with avocado, alfalfa sprouts, olive paste, tomatoes, spinach, etc., on freshly baked bread, along with a tasty tea-lemonade that had fresh herbs and fruit floating in it. Yea, it was pretty much heaven. 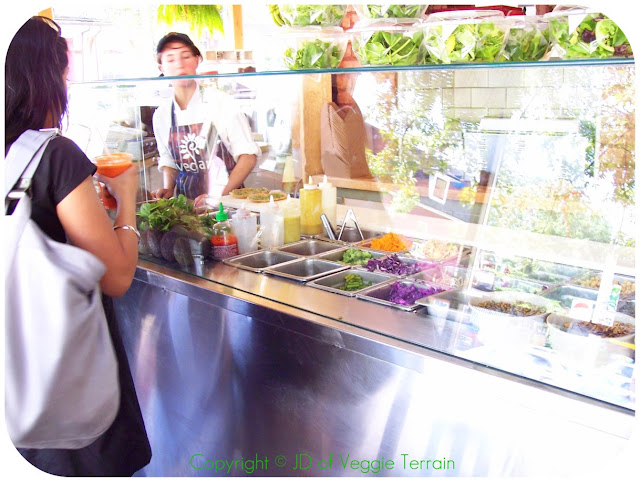 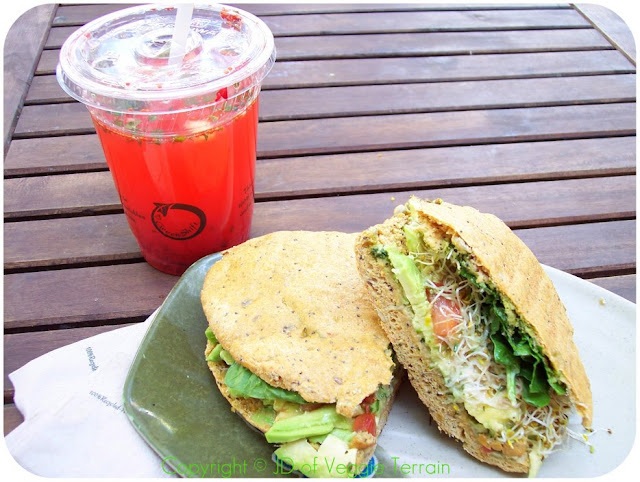 Believe it or not, another delicious sandwich that I had came from Subway, of all places! We stopped there on our way out to wine country one afternoon. (That's right, I ate a foot-long sub and then proceeded to get tipsy drinking upscale wine - that's called "class"). Anyway, the best part about the sandwich was the green olives, without pimentos. You just can't get that kind of luxury at Subway around here. 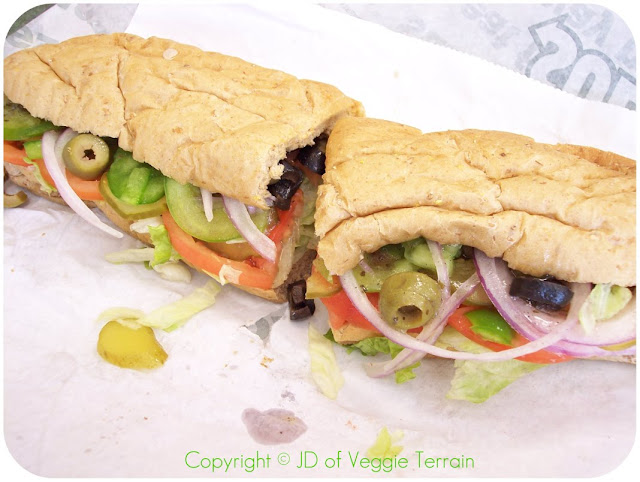 Speaking of the good life, it was definitely nice to be able to buy freshly-baked vegan goods at many of the grocery stores/bakeries that we visited in Toronto. Pictured (below) is an oatmeal cookie that I bought to snack on during our flight home - although I ultimately ended up eating it in the car while we were driving around the city. 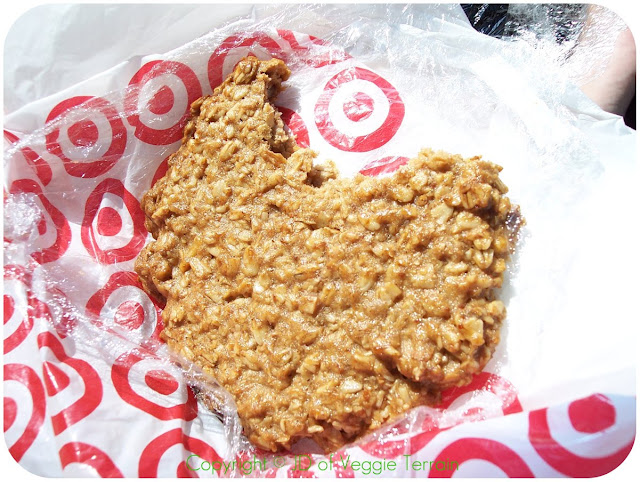 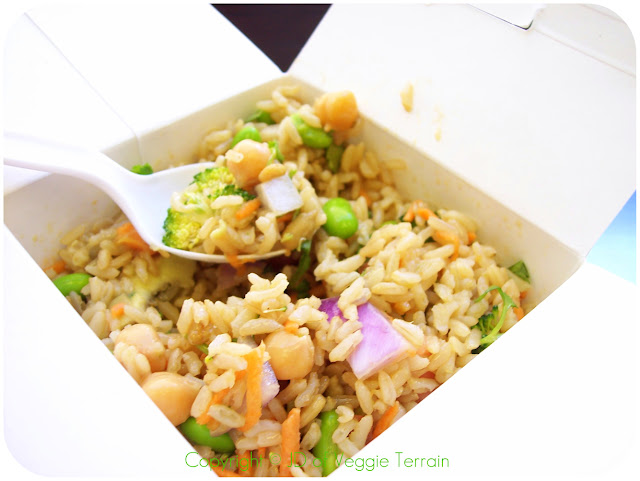 You know how sometimes when you're away from home for several days, your tummy starts crying out for familiar food, regardless of how well you're eating? Well, maybe you don't... But I do, and for some reason, it's always some variation of rice 'n beans (not in the traditional sense) that I want. I start feeling a bit unsettled after day 3 if I haven't some form of them, so I was happy to find Freshii, which is one of those places that lets you pick from a variety of ingredients that are then combined into one dish. I got the brown rice bowl and added chickpeas, edamame, red onion, carrots, broccoli, avocado, and soy sauce (pic above). Rice + beans craving = satisfied. 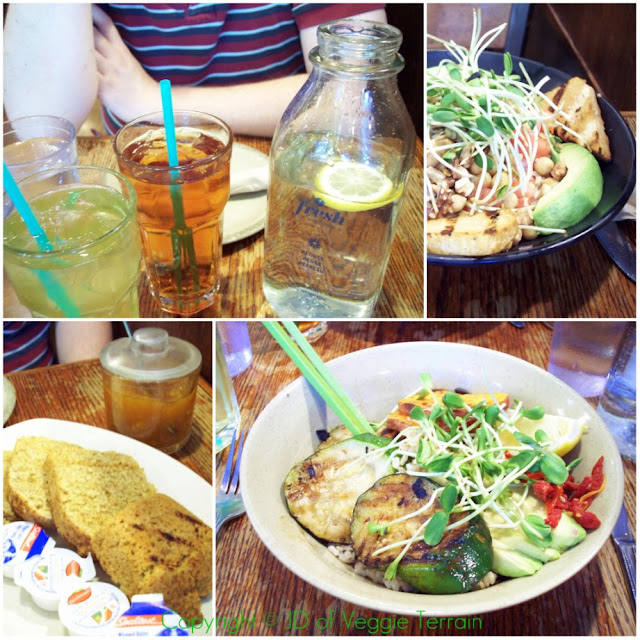 Last on my Toronto list was Fresh (see collage above), a place that I was probably the most excited about visiting. It's a completely vegan restaurant (re: preparation, although you can request dairy products on the side), and they make everything from scratch using only whole foods. What's not to like, right?

Well, the service, for one. There was a definite air of "vegan superiority" floating around Fresh, if you know what I mean. (Which, as an aside, is one thing I just can't get over - why do some vegan/vegetarian restaurants insist on creating such a uninviting atmosphere? There are already so many negative stereotypes associated with veganism out there that allowing your staff to act like condescending asses makes even us vegans start to think all vegans suck!)

Anyway, I did love the reusable glass bottles that our water was served from, and the orange marmalade that came with our cornbread was great. However, our bowls were merely average (CH got the buddha bowl, and I got the beach bowl), and, frankly, a bit overpriced. 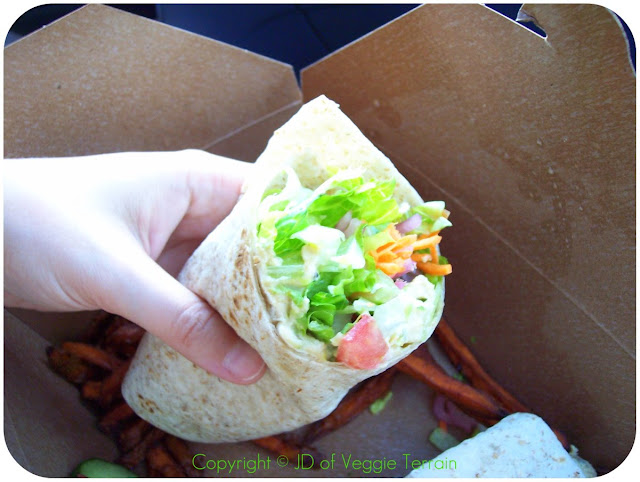 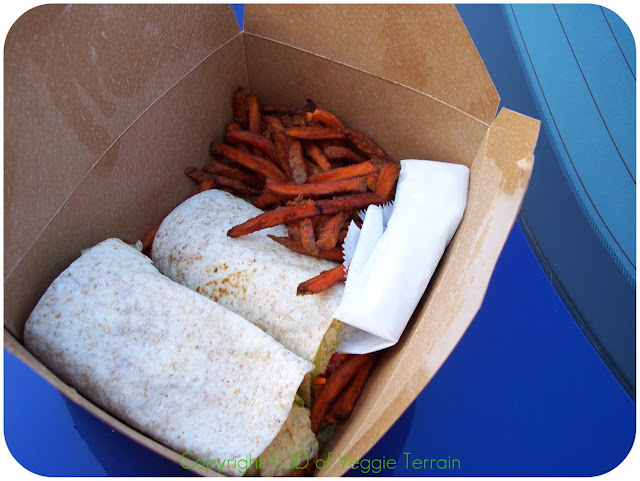 On a better note, above are a couple of shots of the fantastic wrap and scrumptious sweet potato fries that I ordered from Seva, a restaurant in Ann Arbor, Michigan. We planned to stop in Ann Arbor en route to Canada, specifically so that CH could visit a very well-known, very meaty deli. Thus, you can imagine my elation upon discovering that a vegetarian restaurant was sitting just a stone's throw away from the deli. As a result, CH got his fix and I got mine, which made for a very pleasant 8-hour road trip north.

Back in Illinois, we visited Green Prairie Bakery and Cafe, which is a brilliant little place in the far northern suburbs of Chicago. Although it's not a veg restaurant, they offer several vegan options (such as home-made cookies, muffins, and sandwiches), which makes me love it even more. The staff is perfect - friendly, helpful, talkative - and the food is great. My favorite thing to get is the chickpea salad sandwich (pictured below), which is a combo of chickpeas, almonds, sunflower seeds, lemon, thyme, Vegenaise, and more.

And let us not forget the chocolate chip cookies. Ah yes, perfection if I've ever tasted it. They're so good, in fact, that this I-could-go-either-way-on-cookies girl bought every single one of them the last time she visited Green Prairie. "Oh, and I'm gonna clean you out of your vegan chocolate chip cookies, too..." Yea, those words actually came out of my mouth. And I didn't even bat an eye. 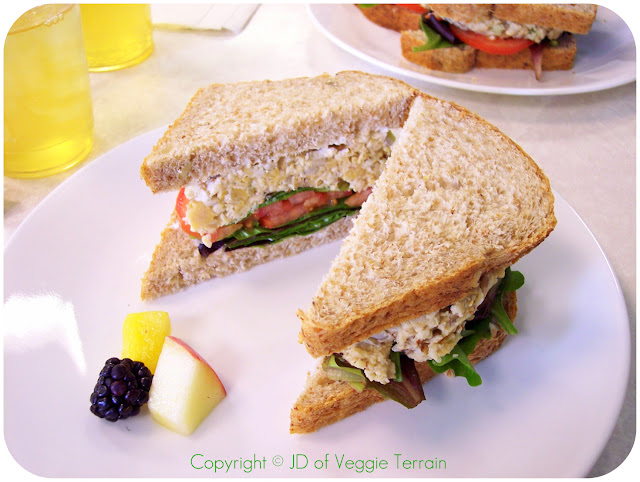 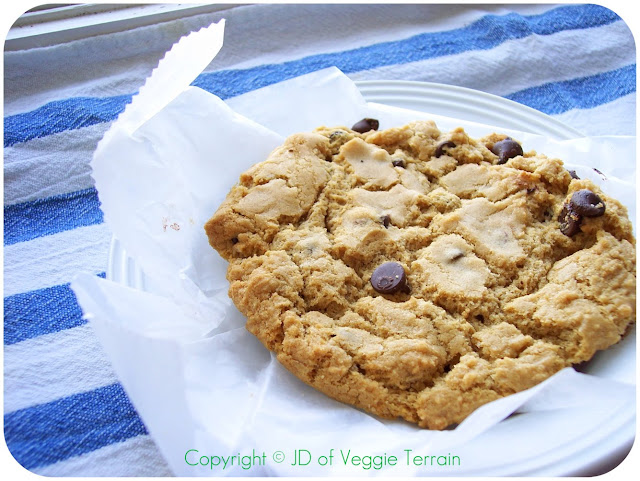