{VeganMoFo} A Trip to Farm Sanctuary 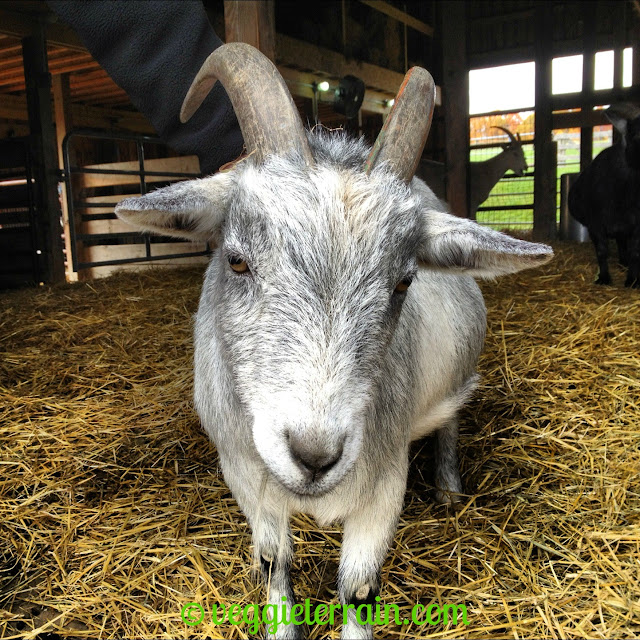 I've longed to visit Farm Sanctuary since I first read about it six or seven years ago.  The amazing part was discovering that a place like Farm Sanctuary - where rescued farm animals would be treated with the kindness and compassion they were completely denied their entire lives - even existed.  The not-so-amazing part was that the nearest Farm Sanctuary was 700 miles away from where I lived at the time. 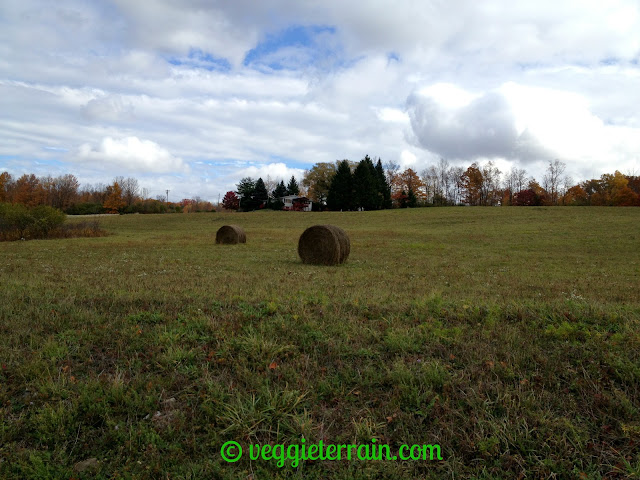 So, when we made the move to NYC a little over a year ago, visiting Farm Sanctuary quickly shot to the top of my priorities list.  And, I'm happy to say, CH and I took a road trip to the inspiring Watkins Glen, NY farm just a week ago.

We rented a car, packed it full of vegan essentials (like homemade trail mix!), and set off on a rainy Brooklyn morning. Our route took us through northeastern Pennsylvania and then back into New York, to the Finger Lakes region. 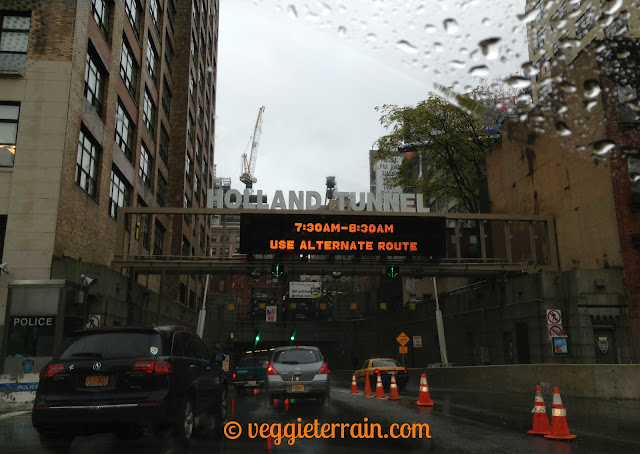 Along the way, we stopped to eat in Scranton, PA, home of two of my favorite people:  Amtrak Joey B. (aka Joe Biden), and Michael Scott (aka Steve Carell on "The Office.")

Of course, I insisted that we visit at least one "Office" landmark, and CH happily obliged.

We tried to find Cooper's Seafood restaurant, but had no luck.  So, we ended up at Poor Richard's Pub, which is mentioned in several episodes of "The Office."  It wasn't open when we got there around 2 pm, so I snapped a picture of the sign, and off we went. 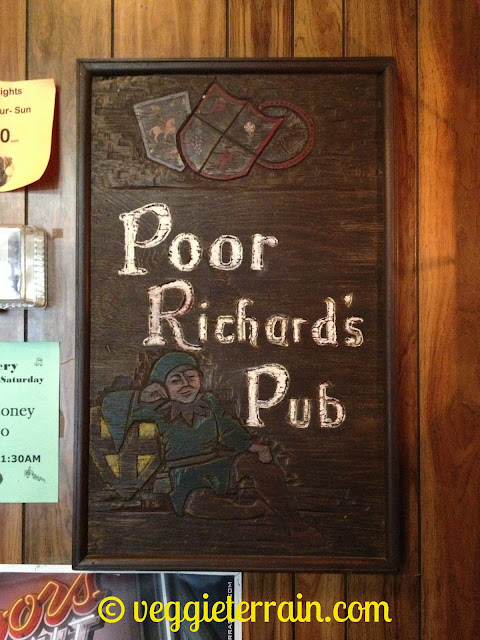 When I wasn't fantasizing about running into Michael (or Jim! or Stanley!) on the streets of Scranton, I was dining at an entirely vegan restaurant - with really sweet and friendly employees - called Eden A Vegan Cafe.

After lunch, we grabbed a coffee and got back on the road. 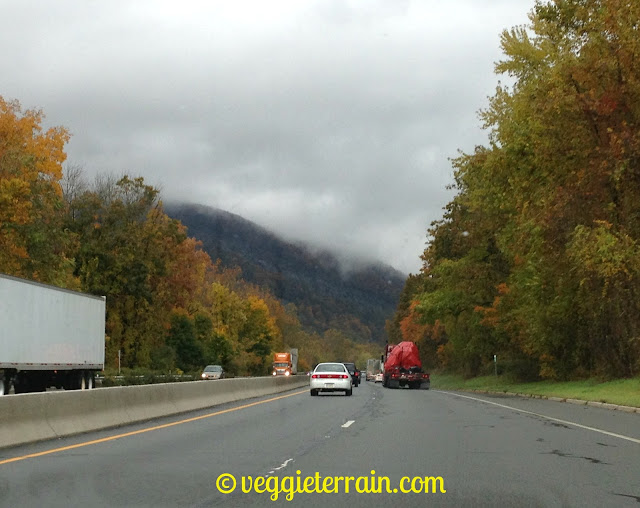 Five hours later, we finally arrived in Watkins Glen.  There, we stayed at a lovely bed and breakfast called Idlwilde Inn (whose owners will happily accommodate a vegan diet with advanced notice!).

Then, the next day, we headed out to visit the animals at Farm Sanctuary! 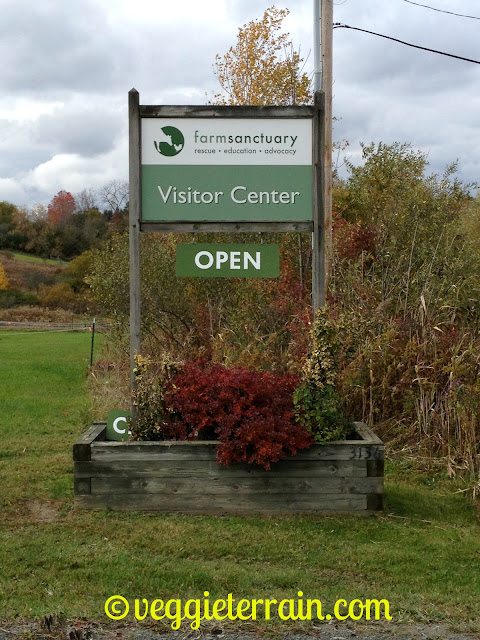 Farm Sanctuary was established in 1986 "to combat the abuses of factory farming and encourage a new awareness and understanding about farm animals."  It has three locations, including its farms in Watkins Glen, NY (where we visited); Orland, CA; and Los Angeles, CA.

Its mission is to "protect farm animals from cruelty, inspire change in the way society views and treats farm animals, and promote compassionate vegan living."  Today, Farm Sanctuary is the "largest and most effective" farm animal rescue and protection organization in the country. 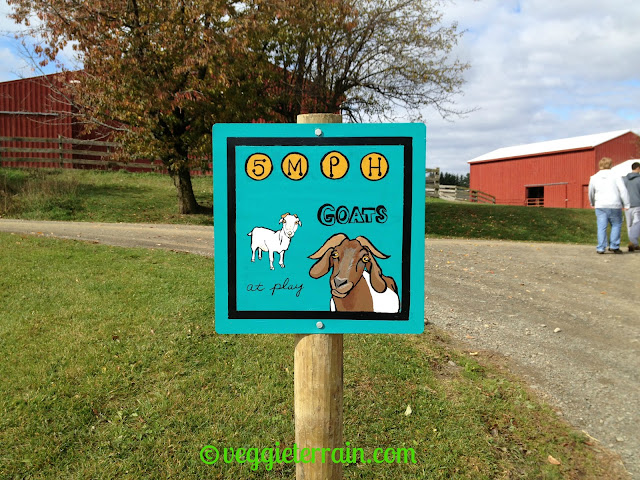 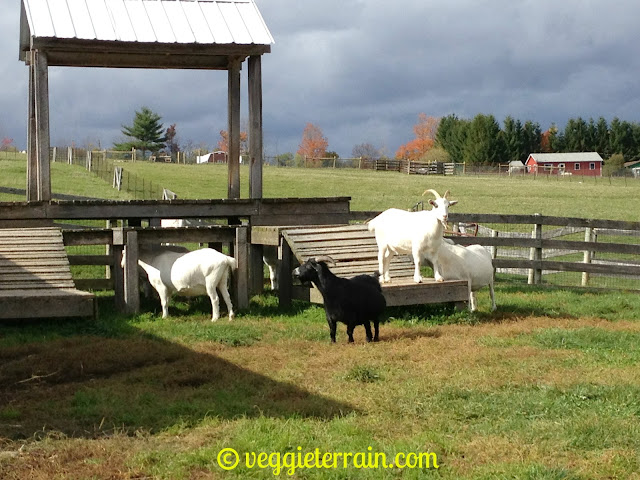 At the beginning of our guided tour of the 175-acre property, we walked by the sign pictured below.  It reads, "You are entering the animals' sanctuary.  Please remember that you are a guest in their home."

More than 500 rescued farm animals reside at the farm, which is quite impressive.  We were able to meet goats, chickens, turkeys, cows, and pigs while there. 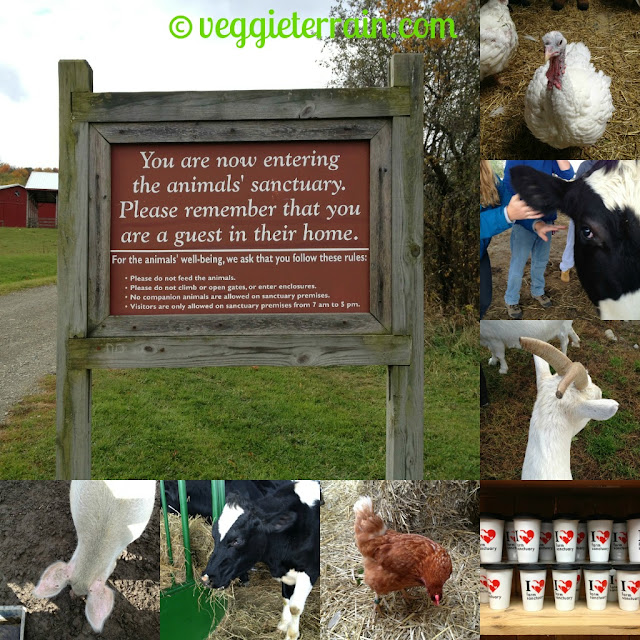 One of the highlights of our visit was when I received a friendly lick from the darling cow (second from the top, right) promptly after I took her photo.  We're now BFFs for life. 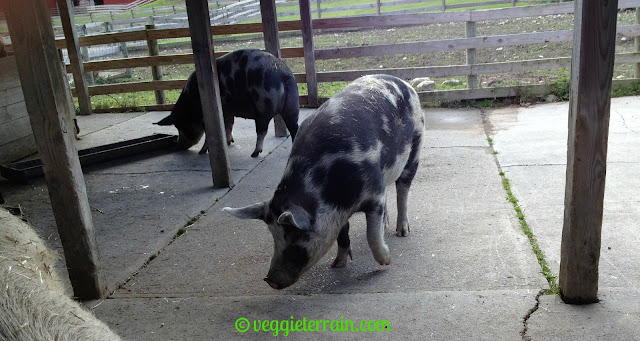 I was especially looking forward to hanging out with the pigs at the farm.  My not-so-secret desire is to adopt a piglet someday - but not until I have a huge backyard for him to root around in, which isn't happening anytime soon.

Therefore, I was really disappointed that the pigs were eating during our visit, which meant that we couldn't interact with them.  We still managed to reach through the fences to give 'em a pat on the back though! 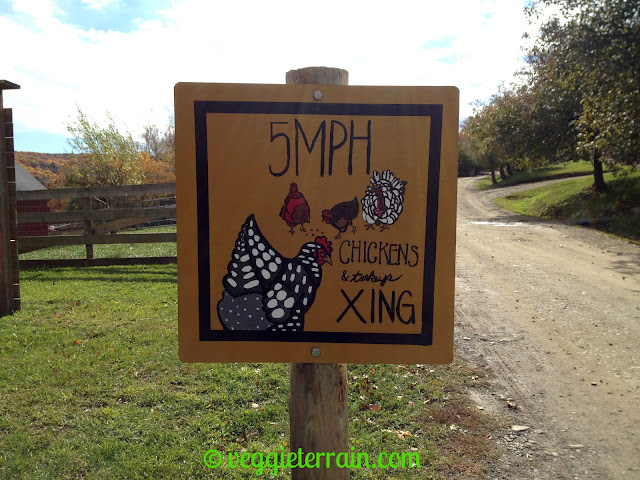 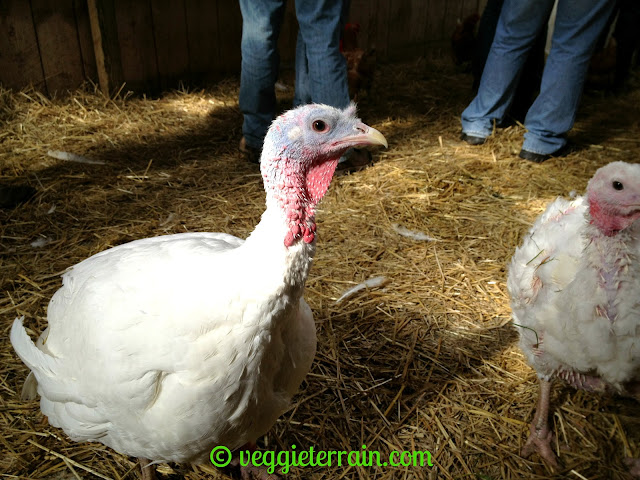 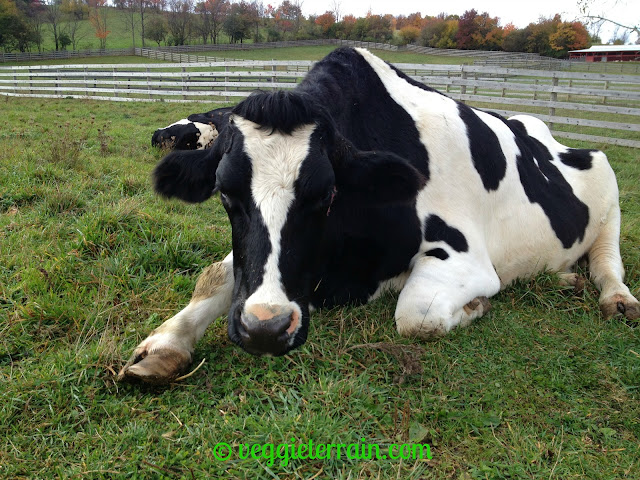 This gorgeous cow was rescued from a factory farm, where she would've been brutally slaughtered at just 2 years old. With the help of Farm Sanctuary volunteers, she's reached 11 years of age, and is able to relax in lush green pastures while greeting her visitors. 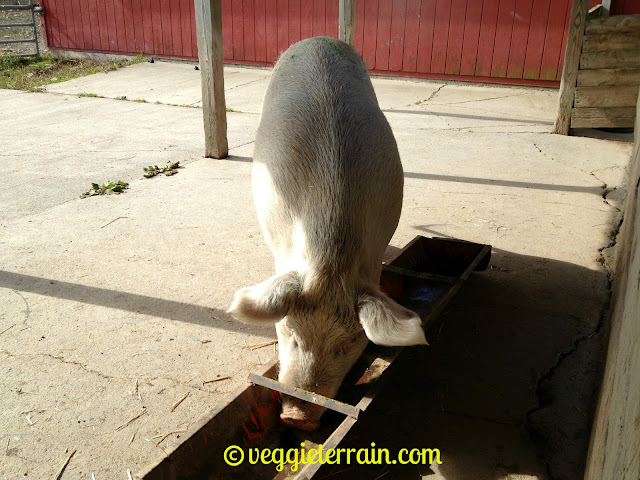 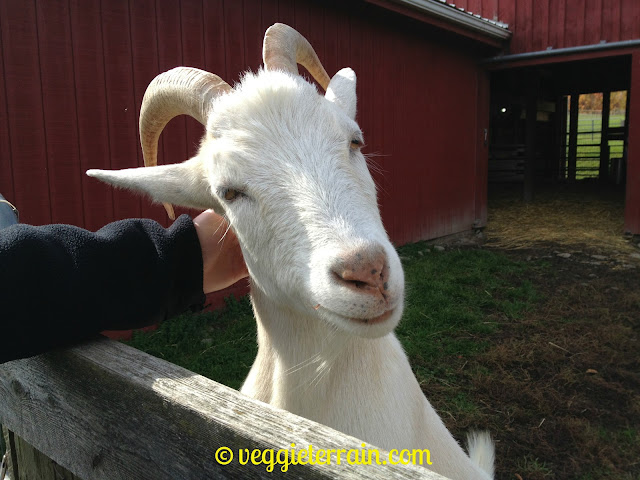 Yes, that's CH, reaching out and making a new friend. As we left the sanctuary, we read this thought-provoking quote on a sign: "Until we extend our circle of compassion to all living things, humanity will not find peace." - Albert Schweitzer


After our awe-inspiring tour, we stopped off for a tipple at several of the wineries along Seneca Lake Wine Trail. 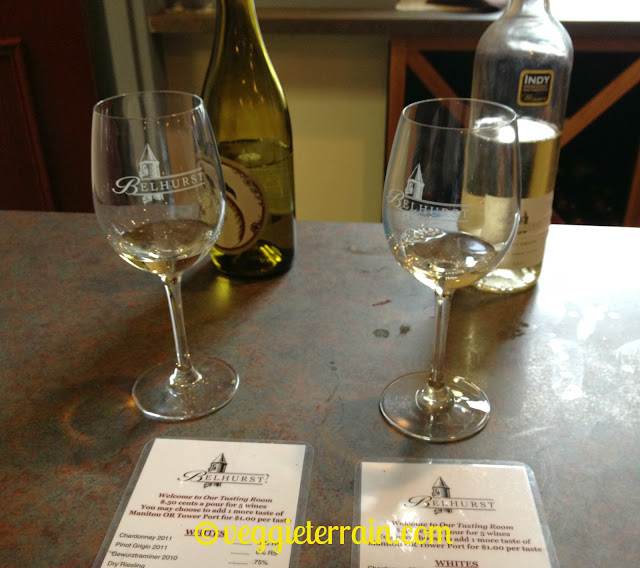 Then, once we'd had our fill of "grapes" (if you can ever really have your fill), we visited Red Jacket Orchards' Farm Store to stock up on some fresh fruit and apple cider.

We tasted several varieties of heirloom (and non-heirloom) apples, as well as a few different kinds of jams and jellies. 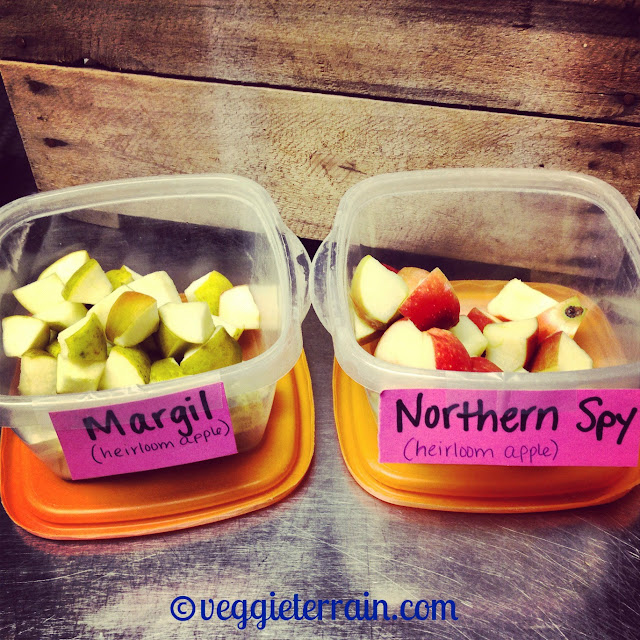 We also tried every single orchard-pressed cider and 100% fruit juice that Red Jacket makes.  I was probably a bit overly-excited to sample them - especially since I covet their heavenly strawberry juice every time I visit NYC's Union Square Greenmarket. 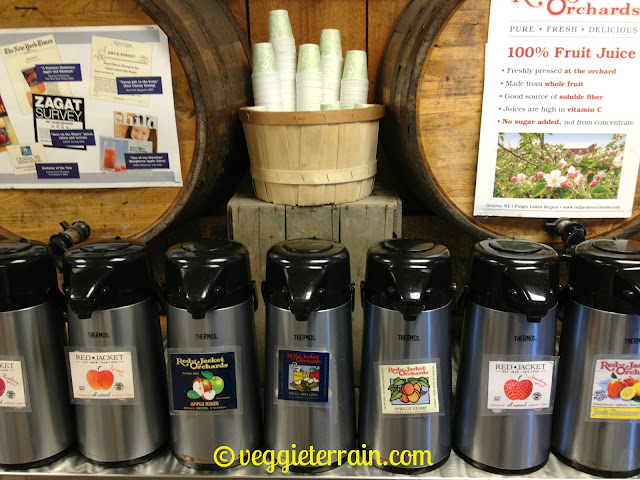 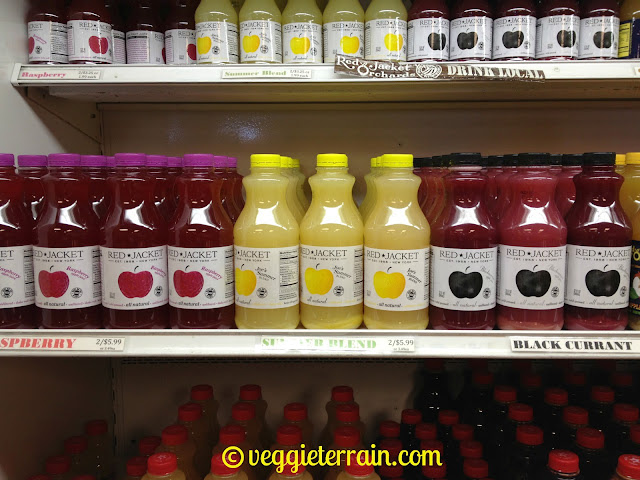 After an incredible day, we drove to Ithaca, had dinner, and then returned to Idlwilde to rest up before the long drive home. 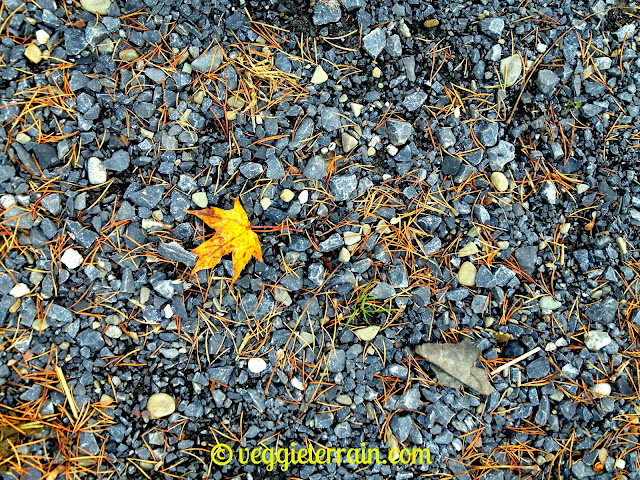