It's official: Kale is finally getting its due.

These days, you can find kale salads in restaurants all over the country, kale in juices at gas stations/convenience stores, and even kale chips on the store shelves of non-health food stores (see:  Trader Joe's).

In fact, it has become so popular - so ubiquitous - that I'd be surprised if a backlash weren't a' brewing.  Soon enough, poor kale will be languishing on the "Not List," having been upstaged by some other food that vegans have been obsessing over for ages...

Regardless, its myriad health benefits (and fantastic, though some would call "acquired," taste) always keep me coming back for more.

Kale, like cauliflower, broccoli, and Brussels sprouts, is a member of the cruciferous family, which is New Latin for "cross-bearing."  The name comes from the shape of the plants' flower petals, which resembles the shape of a cross.  However, unlike almost any other vegetable, kale is considered to be a nutritional standout* in three major areas:
Here are just a few details regarding what makes kale stand out as a superfood:

When to buy:  Kale is available year-round, but its peak season is during the winter, when frost is said to give it a sweeter flavor.

Selecting:  Choose dark colored kale with small to medium-sized leaves.  Avoid bunches with yellow or brown spots, or leaves that are dry or wilted, which indicate aging.

Storing:  Keep unwashed greens in the coldest part of your refrigerator, stored in a paper-towel lined, plastic bag for 3-4 days.  Remember that water is kale's enemy, as it speeds decay.

Cleaning:  Wash immediately before using - and thoroughly, because kale often harbors dirt and grit (especially the curly leafed variety).  Allow the leaves to soak in a deep container/basin of water, giving it a stir or two with your hand to release some of the dirt.  Dump the dirty water out and repeat this process 2-3 more times.  Alternatively, use a salad spinner to wash chopped kale leaves several times before using.

Refreshing:  If your kale starts looking a bit sad, simply trim the base of its stems and soak for a few minutes in lukewarm water.  Be sure to dry before returning it to storage, if you're not using it right away.

Preparing:  To quickly and easily remove the leaves from the stalk, turn the leaf upside-down, grab the bottom of the kale stem with one hand, and slide your other hand down the stem - essentially stripping the leaves right off.  Or, if desired, use a sharp knife to cut the leaves away from the stems.  Then, roll the leaves into a cigar and slice/chop them, almost like you're chiffonading basil.  Discard or compost the tough stems, or save them for making juice or vegetable stock. 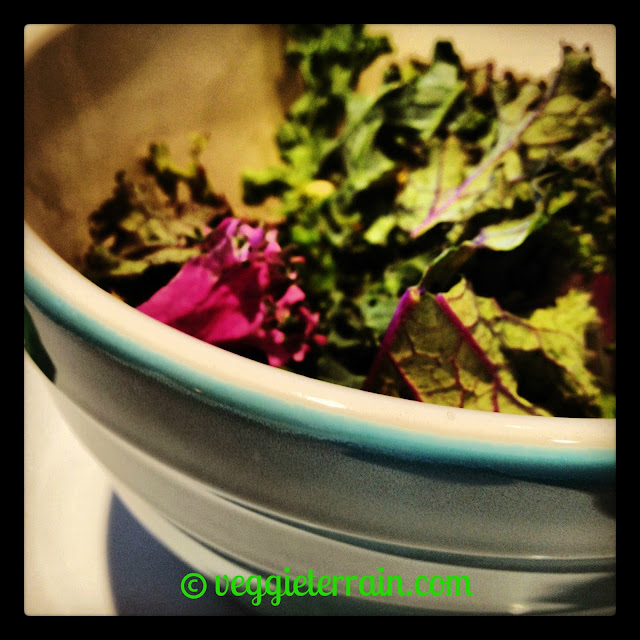 Alright, that's enough of my babbling...  I certainly don't want to give you a case of kale fatigue before we even get to the recipes!

Following are a few tried and true chip ideas to get you started (if you don't have one of your own already).  My absolute favorite is from raw chef Doug McNish, but a kale chip in any form is pretty fantastic.

Please note that the Environmental Working Group (EWG) has named kale is one of it's "Dirty Dozen Plus" produce items, meaning that conventionally grown kale may contain "pesticide residues of special concern."  As a result, it's best to go organic whenever possible.