A {Vegan} Love Letter to LA in Two Parts 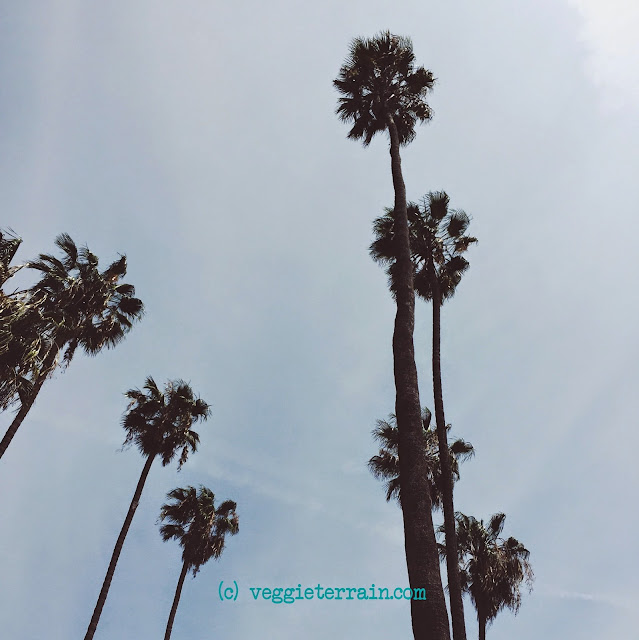 As a New Yorker it’s become apparent that I’m not supposed to fall in love with, or even really like, Los Angeles. Bestowing any type of warmth on LA beyond a stoic eye-roll is tantamount to declaring a fatwa on the crowded, filthy, noisy city that I call home. I mean, there’s a reason why the East Coast/West Coast Biggie/2Pac feud raged so hard during my youth, right? Even Chloe Sevigny agrees.

Nonetheless, at the risk of sounding like I’m betraying The City of Dreams, I’m gonna go out on a limb here and declare that I love Los Angeles. Like, seriously, LOVE it. Not enough to consider leaving NYC, mind you (even after being hit by a car!), but enough to wax poetic about it for at least two very long blog posts…

Yes, I know. Everyone talks about how great the weather in Los Angeles is, but it’s for a reason. To call it perfect is truly an understatement. However, since I’ve never really considered myself a “summer person” (mostly because I have a low-threshold for sweating in non-fitness-related situations; see: The NYC subway), I wasn't exactly sure how I'd feel about LA.

Turns out, the lack of humidity is beyond gorgeous, and being able to get ready in the morning and be appropriately dressed all day is kind of a revelation. Who knew? 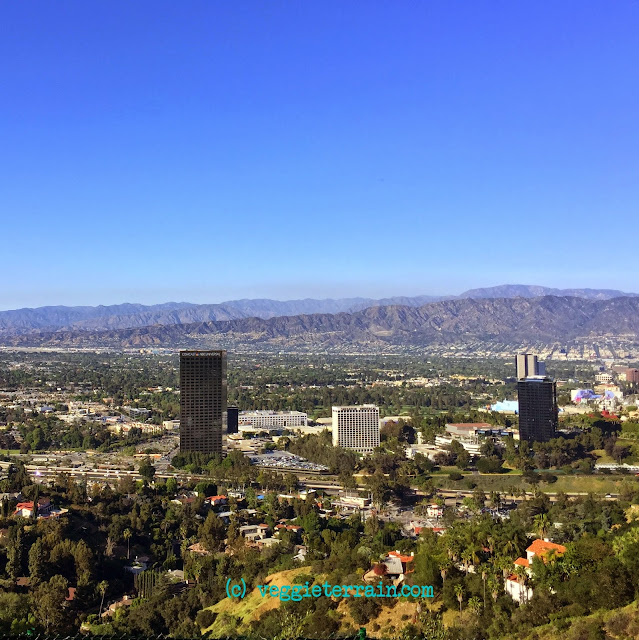 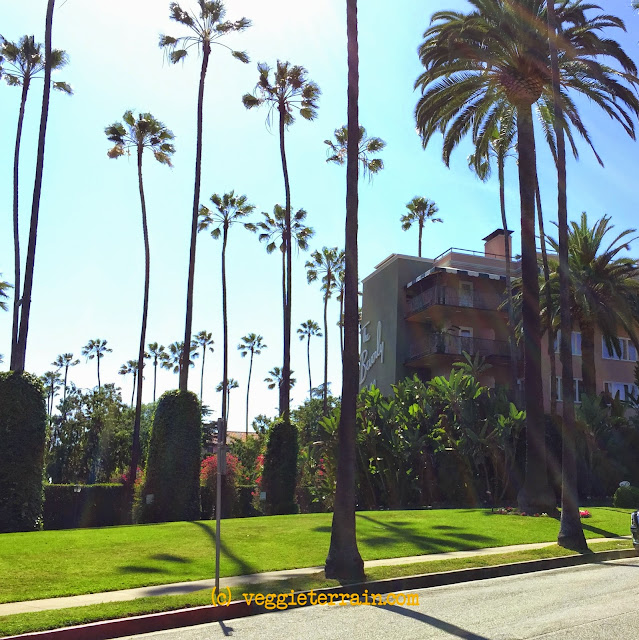 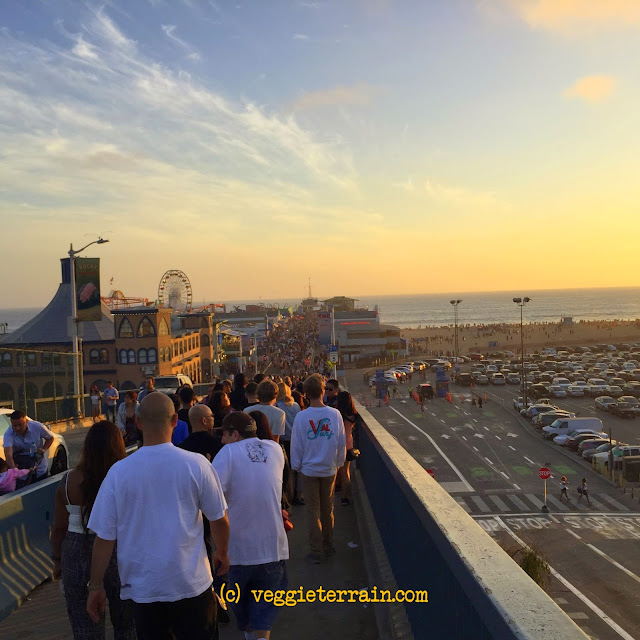 Frankly, I could continue trying (and failing) to adequately describe the weather's utter holiness, but I'll save us both the time and just share the following picture, which pretty much sums it up... 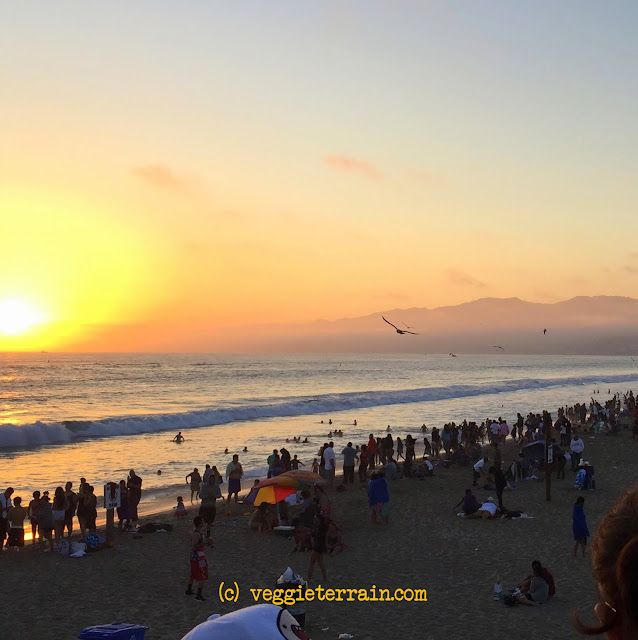 It’s been said that NYC knows how to make a fucking bagel (truth), while LA knows how to make a fucking salad. Obviously, which of these you value more highly probably depends upon what time of day it is, as well as how gluttonous you’re feeling, which is kind of not the point. The fact is: Californians have access to some of the best fresh, local produce in the country, giving them a huge upper-hand when it comes to healthy, seasonal, hippy (aka: vegan) cuisine.

In order to take advantage of said local produce, we decided to visit Sage Vegan Bistro, which ended up being our favorite LA restaurant by a landslide. In fact, Charlie (f/k/a: CH) and I adored it so much that we visited twice during our trip. Our first dining experience there was at their Echo Park location, where we shared a ton of scrumptious food.

We began with the Raw Bowl, which was made of massaged kale, sliced apples, pickled cabbage, carrots, cucumbers, avocado, tomato, onions, raw dill cheese, and cashew alfredo sauce – or, basically everything that’s good in the world! 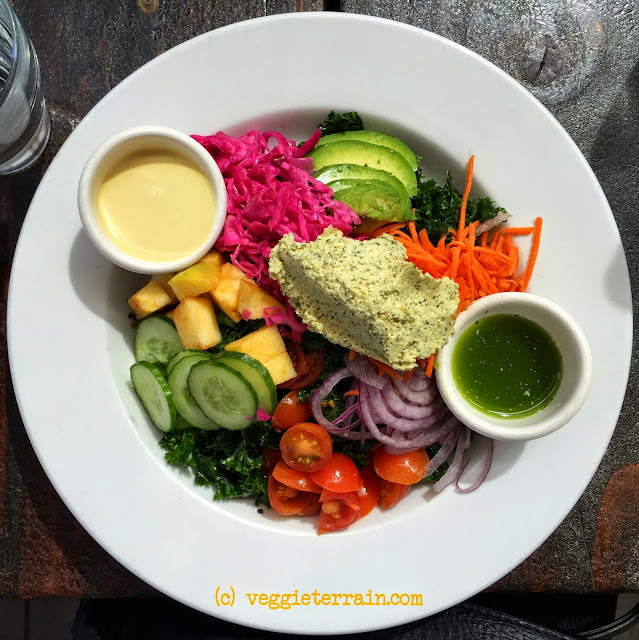 Next, we split two tacos a la carte: One Street Taco (made of chili seasoned jackfruit carnitas with onion, cilantro, lime, and garlic aoli) and one Baja Avocado Taco (made of tempura battered and fried avocado topped with cabbage and habanero cream sauce). It was the first time either of us had tried jackfruit, and Charlie was in vegan hog heaven. Likewise, we both ooo’d and ahh’d over the baja taco, especially savoring the juxtaposition of buttery fried avocado and spicy habanero cream. Perfection. 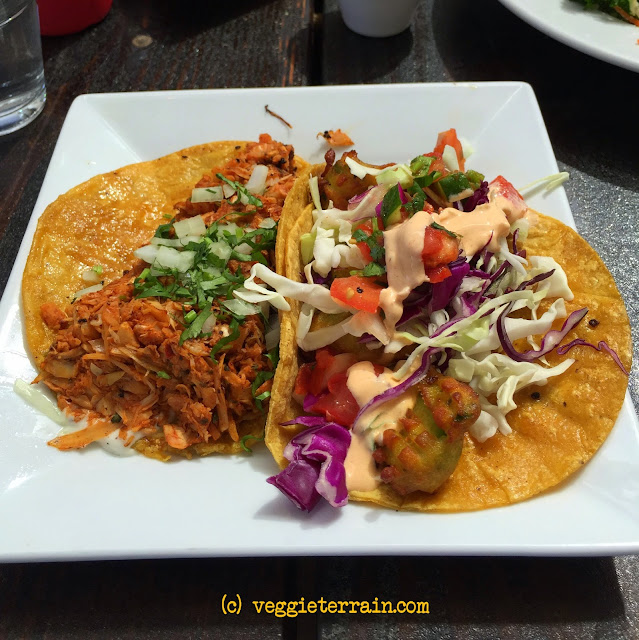 Lastly, and only because we couldn’t resist another iteration of Sage’s incredible dill cheese, we tried the Tostadas. They were topped with black beans, pickled cabbage, avocado, romaine lettuce, and verde sauce, smothered with dill cheese, and served with a side of nacho cheese sauce. 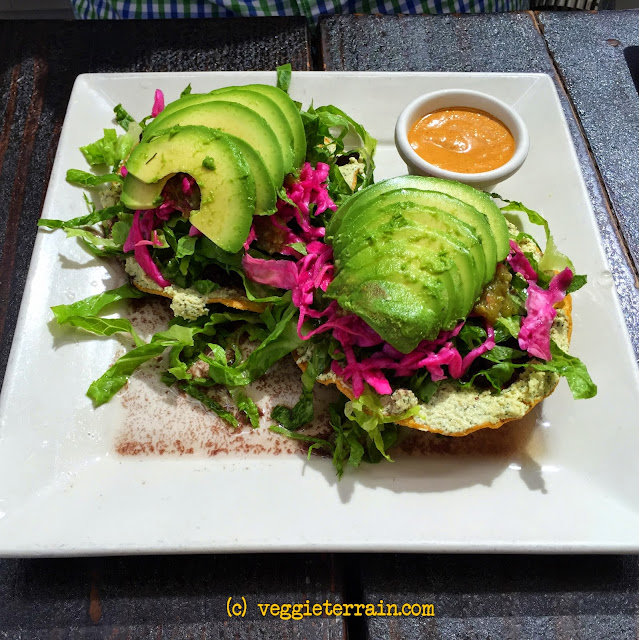 Another popular vegan spot in Los Angeles is Café Gratitude, where, apparently, Jay-Z and Queen Bey are frequent customers. And, although we’d visited another location of the restaurant during our honeymoon to San Francisco (wait, did I forget to mention that I’m married now?! whoops!), we thought we’d give it another try.

Fortunately, there was a Café Gratitude outpost in Venice – conveniently located near the beach, no less – so we decided to stop in for a healthy lunch before exploring Abbot Kinney and hanging out on the coast for the day.

Despite the fact that I wasn’t crazy about my meal, I do have to admit that the restaurant's worth a visit for its amazing location alone. Feeling the ocean air lazily breezing through the restaurant while dining is absolutely sublime.

To start (and ordering something "to start" is how we roll while on vacation), my husband and I (like how I did that, there?) shared the I Am Vivacious kale chips and the I Am Dazzling vegan Caesar salad. 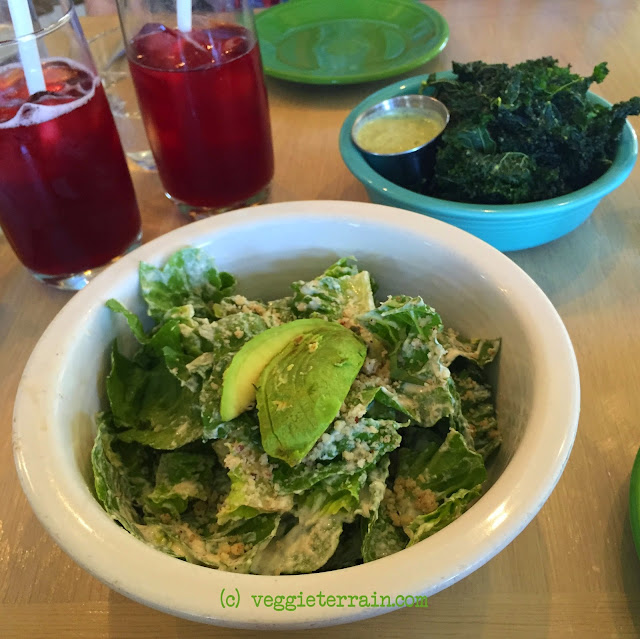 For my entrée, I ordered the beautifully plated I Am Happy raw wrap. It consisted of falafel, zucchini cilantro hummus, spinach, red onions, tomato, cucumbers, harissa sauce, and a garlic tahini dressing, all wrapped up in a sundried tomato wrap. 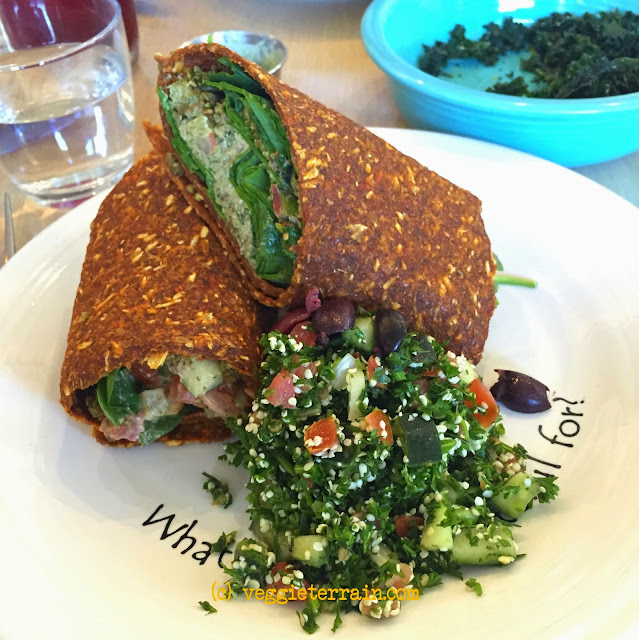 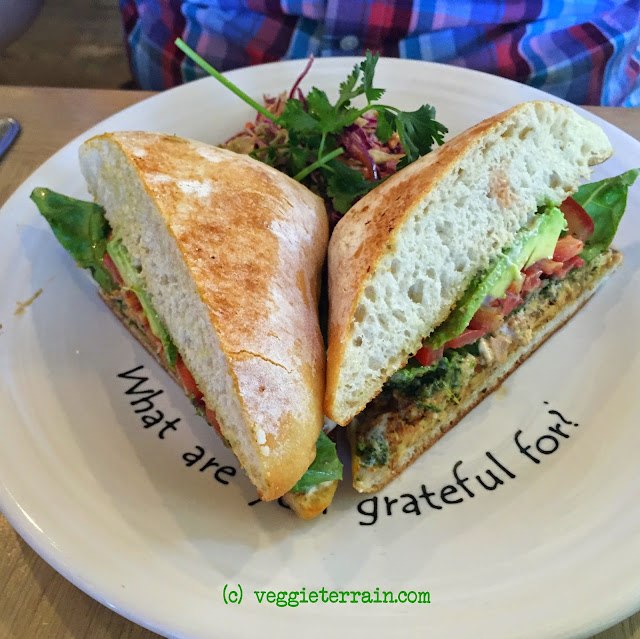 Living in New York City – the land of Dun-Well Doughnuts – I have pretty high standards when it comes to vegan breakfast items. Even so, when pastries from Donut Friend began showing up in my Instagram feed months ago, they created the weary sort of envy that left me fantasizing about flying across the country to get those doughnuts like NOW. Thus, when we initially decided to travel to Los Angeles, it was one of the places that I was most enthusiastic about visiting.

One positive sign on the way to Donut Friend was the cool vegan-inspired stencils that appeared on the yellow brick road (okay, sidewalk) leading there. After posting an Instagram photo of the art, I learned through a comment that the person who created and placed is @misteruncertain, a guerrilla-style activist who spreads vegan messages through creative means. 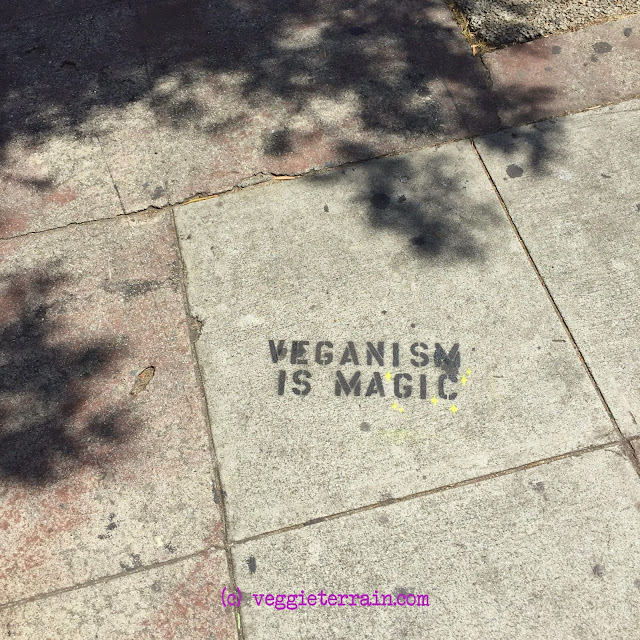 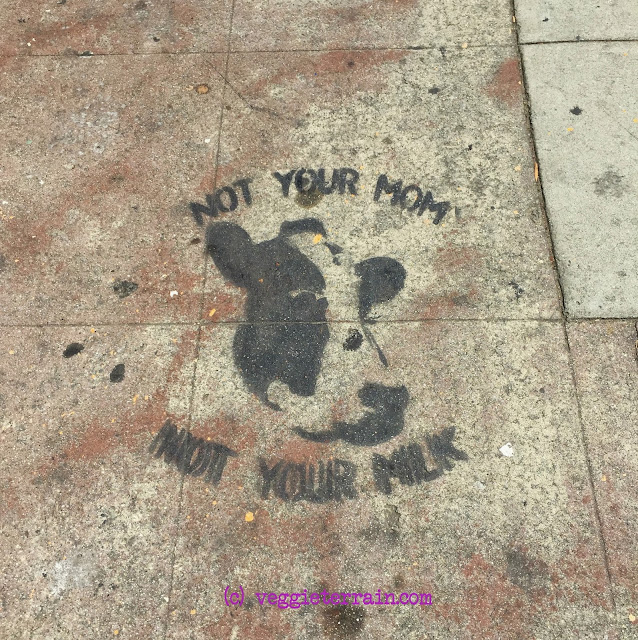 Oh, right. Back to the doughnuts…

We when arrived at Donut Friend I felt a lot like a kid in a candy shop. It was hard not to try every single glorious-looking doughnut, although I think we came pretty close. All told, we ordered seven of ‘em. #FTW!

Note, all of the doughnuts are vegetarian, and most are vegan (or have vegan options). You can also create your own based upon several pastry varieties and a plethora of toppings, glazes, candies, fruit fillings, etc. However, Charlie and I decided to make things simple and just go with the ones that were singing siren-songs at us from the pastry case. 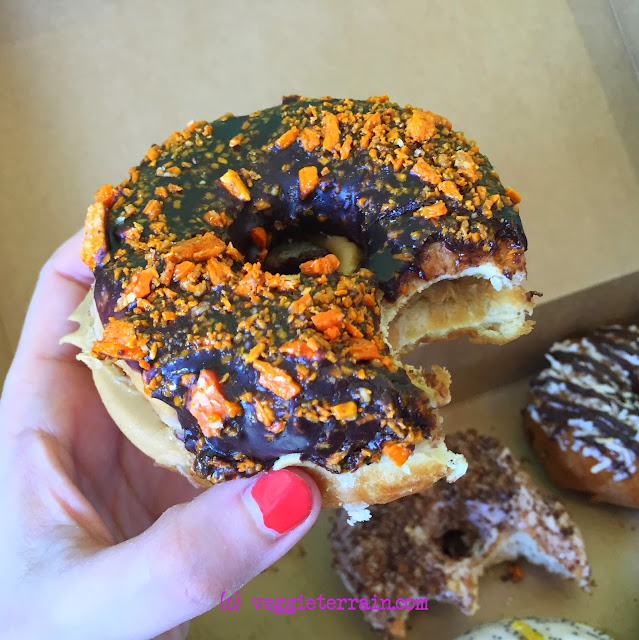 Following is a description of the doughnuts that we begrudgingly (heh!) indulged in:

Stiff Little Butterfingers (a traditional doughnut filled with peanut butter and Just Like Honey, topped with a chocolate glaze and crushed Chick-O-Sticks – vegan);

The Crumb (chocolate cinnamon crumble and vanilla glaze on top of a traditional doughnut – vegan);

The Angry Samoa (a vanilla cake doughnut dipped in chocolate and topped with caramel, toasted coconut, and chocolate stripes – not vegan);

Coconut of Conformity (coconut cream inside of a traditional doughnut, topped with vanilla glaze, toasted coconut, and a pinch of lime zest – vegan);

The Starting Lime (a traditional doughnut filled with lime cream and topped with vanilla glaze and graham cracker crumbs – vegan upon request);

Nutellavision (chocolate hazelnut spread and a dash of olive oil inside of a traditional doughnut, topped with vanilla glaze and a pinch of sea salt – vegan upon request). 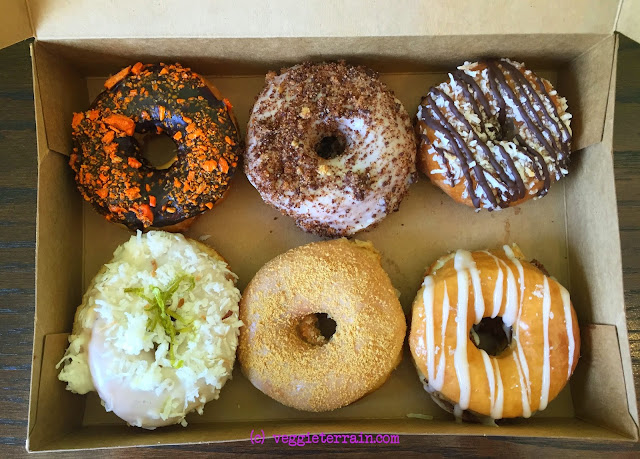 And, lastly, the extra doughnut that didn't fit in the box: The Poppy Gandhi (a vanilla cake doughnut with lemon glaze and poppy seeds on top – vegan). 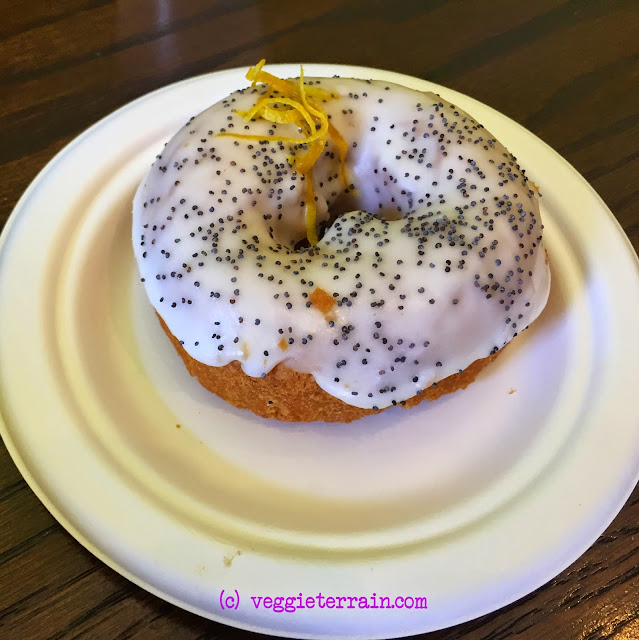 Overall, my favorite doughnuts were probably the Crumb and the Starting Lime, but I’d “settle” for just about any of them. The truth is, I was just ecstatic that Donut Friend lived up to the hype, especially after my long-suffering Instagram lust. Don’t miss this place if you’re in the LA-area!

Now, keep your eye out for part II of my Love Letter to LA...

... it will arrive in your inbox/on Veggie Terrain imminently.
Posted by jd