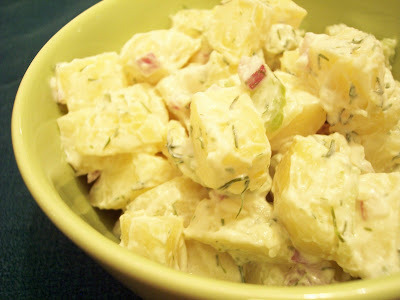 Ah, so you have to make something for your next family event, and you're the only one who's vegan, huh? You don't feel like throwing together yet another boring lettuce-based salad, and you're not in the mood for dessert. Moreover, you want to make something that everyone will enjoy, without all of those puzzled "How can that be vegan?" looks.

Well, guess what? You're in luck!


This potato salad recipe has saved me at countless family events, friends' parties, and holiday get-togethers. And, not only is it one of my personal favorites, but it always gets rave reviews from everyone who tries it. In fact, it's actually one of those dishes that people always claim doesn't "taste vegan," which is code for: "tastes surprisingly good."

(Not that there's anything wrong with something "tasting vegan," obviously - but we all know that's the phrase that many people use for "weird" vegan foods that actually aren't so weird.)

So, at this point, I'd be remiss if I didn't mention Dave Lieberman. He's the amazingly adorable Food Network chef who created this potato salad recipe. Hence, all of the deliciousness credit is really due to him. (Dave had a great cooking show on TV for a couple of years, but it suddenly disappeared. Sigh.) Anyway, the only change that I made to the recipe was to use Vegenaise instead of mayo, which officially makes it a vegan dish.

Alright, on that note I'd like to present you with the single most requested vegan recipe in my cooking repertoire. I know that you'll enjoy it - and that your non-vegan family members and friends will, too.

1.) Put the potatoes in a big pot with enough water to cover them by 1 in. Season with salt & bring the water to a boil, cooking just until the potatoes are tender when pierced with a fork (about 25 mins.).
2.) After they're done, drain the potatoes & return them to the uncovered pot off the heat. Let them sit until almost room temperature. (Cooling them in the warm pot will help get rid of any excess water in the potatoes.)
3.) While the potatoes are cooling, cut the white parts off the ends of the celery stalks. Cut the stalks in half lengthwise, & then across into 1/4 in. slices.
4.) Stir the celery, 3/4 teaspoon Kosher salt, & the remaining ingredients together in a serving bowl large enough to hold all of the potatoes.
5.) When they're cool, cut the potatoes into 1 in. pieces, adding them to the bowl as you go. Then, gently stir the mixture together until all of the potatoes are coated with dressing.

*Tip: This dish tastes best right after it's made, so prepare it just before serving, if possible.