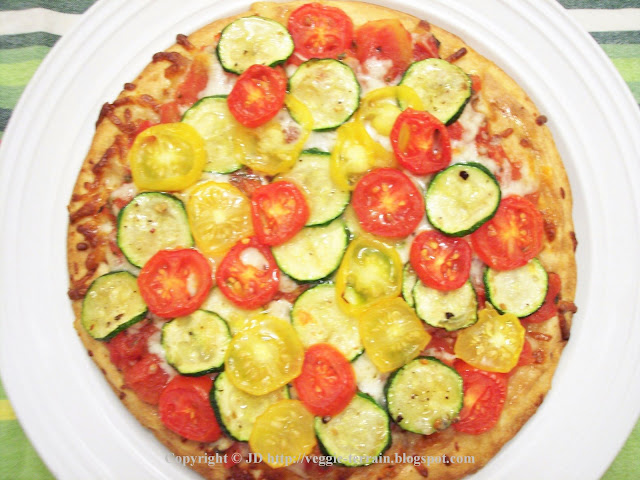 Ah, zucchini. It's one of those vegetables that my subconscious constantly tries to convince me that I don't like...

You see, I'm a really big "texture" person when it comes to food. As a result, certain types of veggies freak me out if they're too mushy (ex: zucchini and tomatoes), while overly-ripe fruits (like brown bananas) make me want to run into the corner and cry.

Thus, I've been a little unnerved by the slowly decaying packs of tomatoes and zucchini that have been sitting in my kitchen staring at me lately. CH and I purchased them at our beloved Costco a few weeks ago, but we haven't been using them as quickly as anticipated. (Yea, what else is new?)

Lending no help to the situation is the fact that CH is out of state for work right now. And, as referenced in a previous post, he's usually the one who's willing to eat the "iffy" fruits and veg around here, which means that I'm left to my own devices...

So, in honor of CH, and instead of throwing away those mushy, not-quite-offensive veggies, I've decided to suck it up and find a creative way to use them.

And guess what? Pizza is the perfect solution, namely because it's as forgiving towards tired veggies as CH is towards me for my Steve Carell obsession.

(Note: measurements are only estimates; add +/- to taste)

1.) Begin by pre-heating oven according to directions on pizza crust packaging.
2.) To make pizza sauce, mix diced tomatoes, garlic, oregano, onion powder in small bowl. Add salt & pepper to taste.
3.) Add 1 tsp. olive oil to pizza sauce, stirring to blend. Set aside.
4.) Lightly brush zucchini slices with olive oil, set on a plate, & season with salt & pepper.
5.) Lightly sauté zucchini in pan over low to medium heat, turning once to soften both sides. Set aside.
6.) Spoon pizza sauce onto crust, followed by a layer of vegan cheese. Top with zucchini slices & tomatoes.
7.) Drizzle pizza with a bit of olive oil, followed by a sprinkle of salt & pepper. Cook approximately 12 mins., or according to package directions. 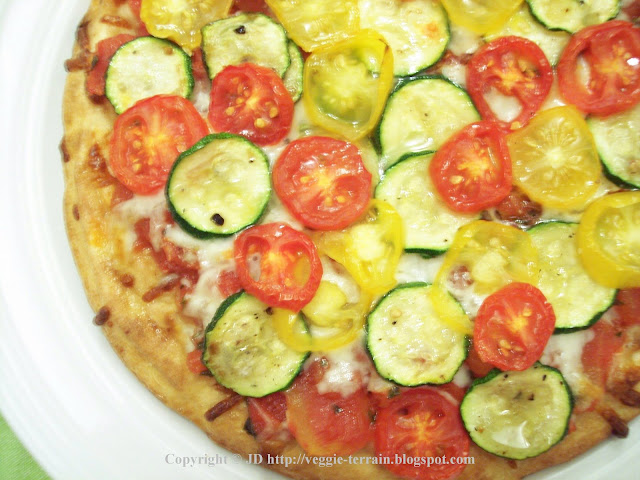