Portland: Food & Sights + The Inside Scoop 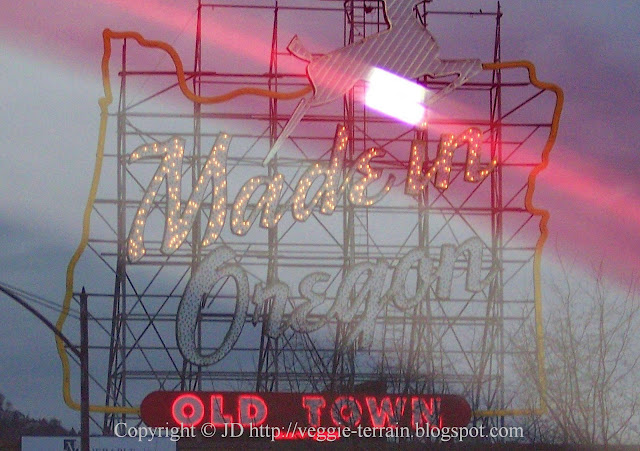 Hello everyone! As you can tell, CH and I have finally returned from our AMAZING Portland trip (boo hoo!), and I can't wait to share all of the details with you...

First of all, let me just say that Portland was so laid-back and vegan-friendly that I felt like I was on another planet. Almost every restaurant and pub had at least one vegetarian option on its menu, and there were tons of places that were exclusively veg!

The coolest thing was that it actually seemed as though veganism/vegetarianism were completely accepted there (unlike in the Midwest), which made me feel right at home. I highly suggest visiting Portland if you haven't already - even if you're not vegan or vegetarian - it's worth it for the food alone!

Anyway, I have tons of pictures (of course), so I'll try to keep this post about food as much as possible, but please don't hate me too much if I stray from it a bit... 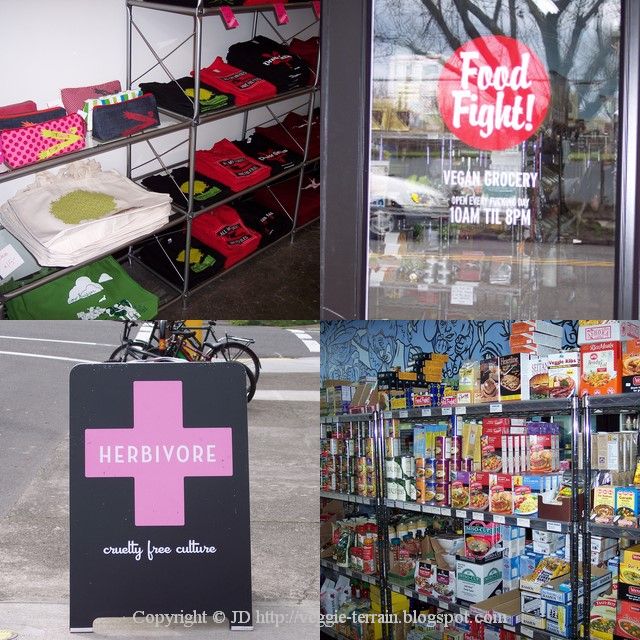 Above is a group of pictures of the first "Vegan Strip-Mall" in the country! It contains four stores: Sweetpea Bakery (with coffee and vegan goodies); Food Fight Vegan Grocery (with everything your little vegan heart desires!); Herbivore Magazine & Clothing Store (with cookbooks, mags, t-shirts, stickers, cotton bags, etc.); and Scapegoat Tattoo Shop (this one's pretty self-explanatory).

And yes, I nearly hyperventilated when I saw it! I mean, a vegan mini-mall? Seriously? Who'd-a-thunk it?!

Anyway, the first picture (going from the top L) shows some of the cool veg-themed t-shirts that were in Herbivore's store. The second one is of the door to Food Fight Grocery, which proudly proclaims that the store is "Open Every Fucking Day!" The third shot is of the Herbivore sign that sits outside of the strip-mall, and the fourth one shows the inside of the grocery store.

Hmm? What's that you said? Show us some of that yummy food already? Your wish is my command...

First stop: Veganopolis, a 100% vegan cafe, which offers cafeteria-style breakfasts and lunches, as well as a diverse menu of tasty vegan vittles. 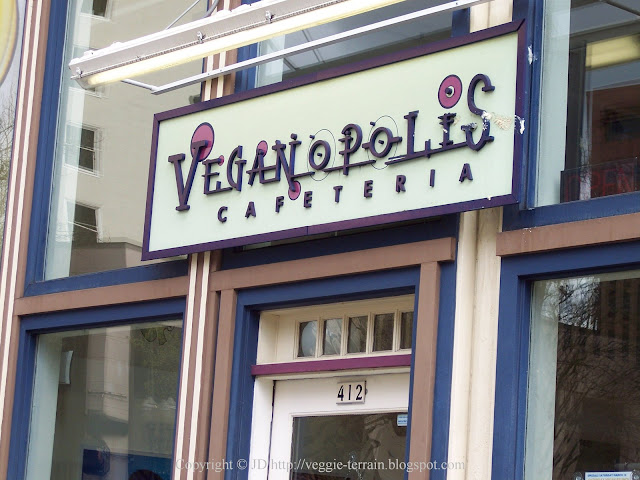 Pictured, below, is my meal from Veganopolis. It's a quinoa burger, which is made from quinoa, tahini, sweet potatoes, and chickpeas. 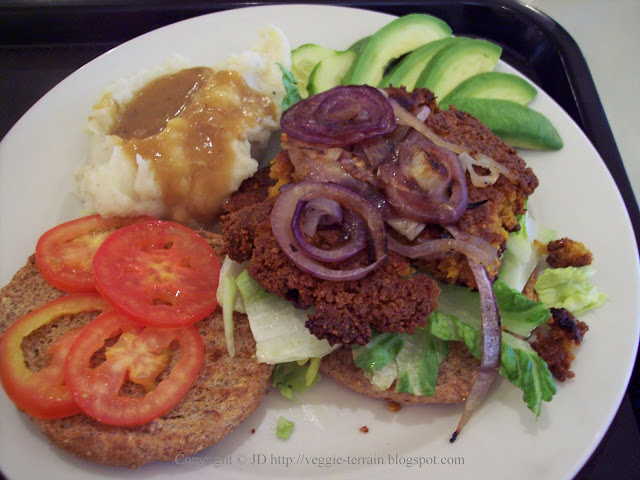 On the side is colcannon, which is a potato dish (minus the gravy) that's popular in Ireland. (We ate there on St. Patrick's Day - go figure.) I also ordered a side of avocado, which I actually ended up adding to the top of the burger, and eating it more like a cutlet than a sandwich. Yum!

The next picture is of CH's Veganopolis meal. It's a Chik'N Pesto sandwich, which is a "chicken" patty, topped with pesto (it was delicious!), spinach, onion, and "rawmesean cheese," all on a ciabatta bun. As you can see, CH had the colcannon, too, as well as a bit of cucumber salad. 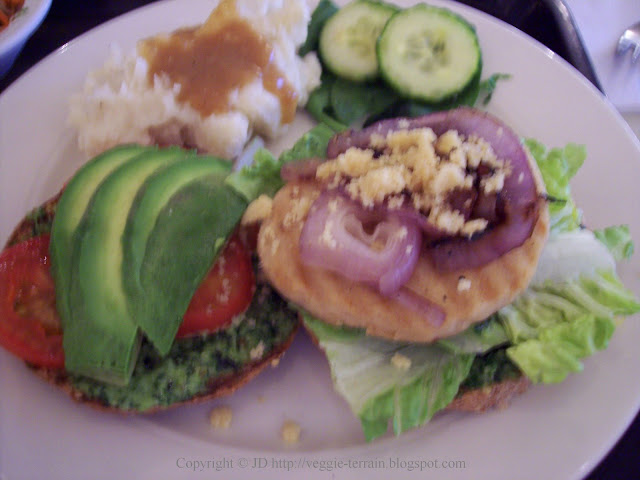 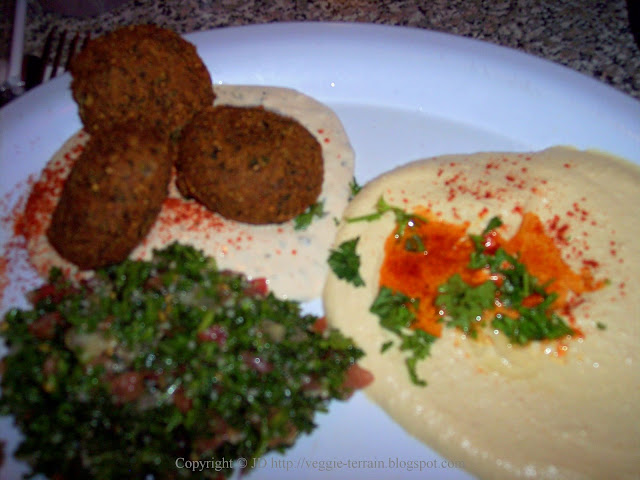 I ordered the Vegan "Mezza Platter," which consisted of falafel, hummus, and a deliciously lemony tabouli salad. And, as if that wasn't filling enough, it also came with the following "side dishes."

(FYI: a single "Mezza Platter" can definitely feed more than one person - trust me - I tried my damnedest to prove that statement false and failed miserably.) 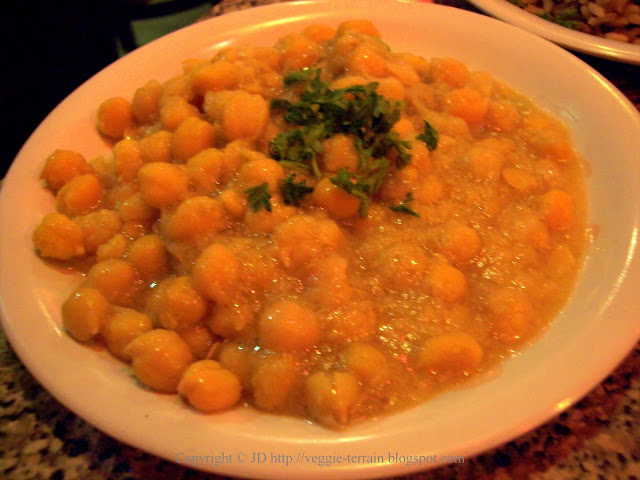 Above is the "garbanzo plate," and below is an amazing lentil and rice dish called "mjadra." Although both of them were terrific, I loved the mjadra so much that I've been working on replicating it, myself. When I get the recipe worked out, I'll post it so that you can try it, too! 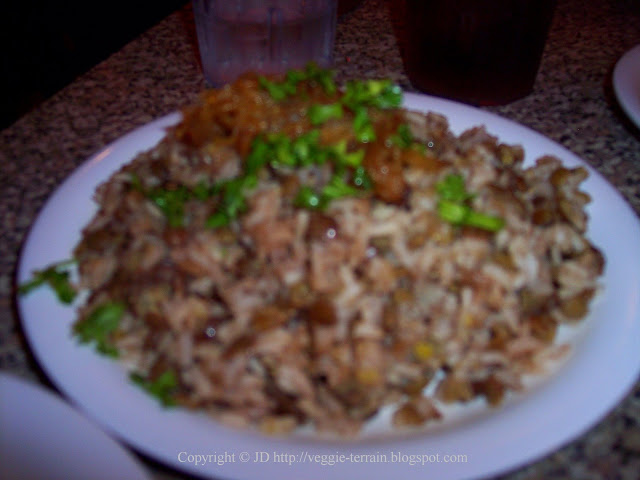 Third stop: The Alameda Brewhouse, which is a brewery/restaurant that brews its own beer and features several veg meals on its menu.

Here I ate a scrumptious veggie burger that was made from veggies as well as "spent" grains, which were left-over grains that were used to brew beer! (Talk about recycling!)

CH and I also shared an unhealthy, but delicious, plate of onion rings, which were accompanied by a cilantro + avocado sauce. Oh, and we had a huge beer-sampler, too, of course! 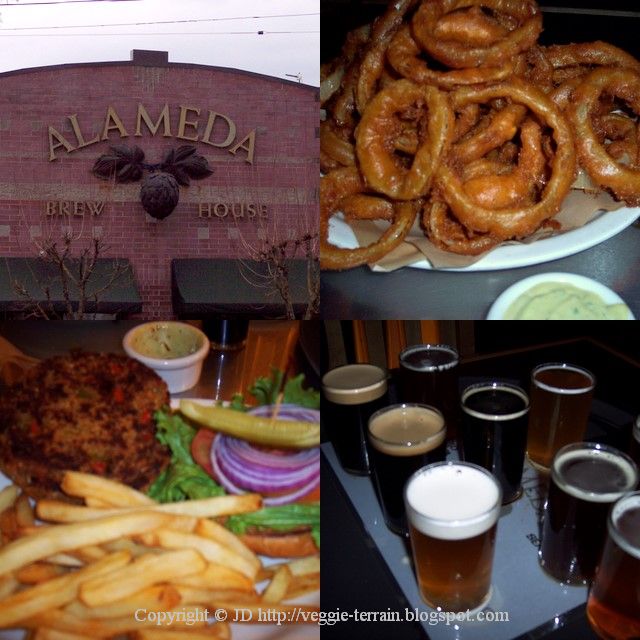 So, after all of that food, you're ready to see a few non-food pictures, right? Well, at the risk of venturing into boring "family vacation slide-show" type of territory, I'm going to post a few pictures of the beautiful things that we saw on our trip.

CH and I were fortunate enough to visit some gorgeous places in Portland and the greater Oregon area, including Silver Falls State Park (which contains 10 waterfalls!), the Columbia River Gorge, and the Japanese Gardens. Following are a few shots from those places... 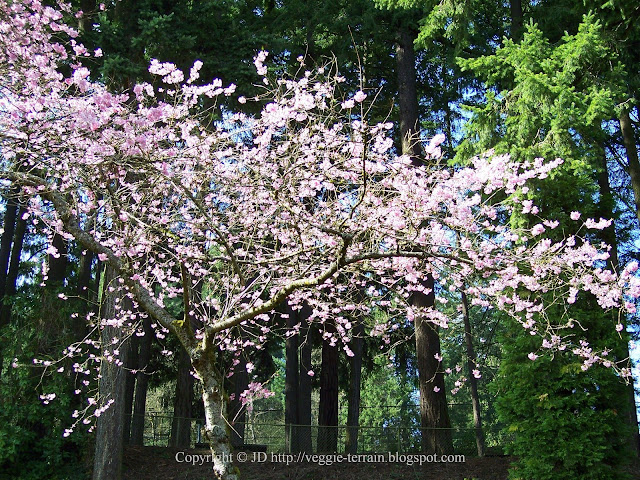 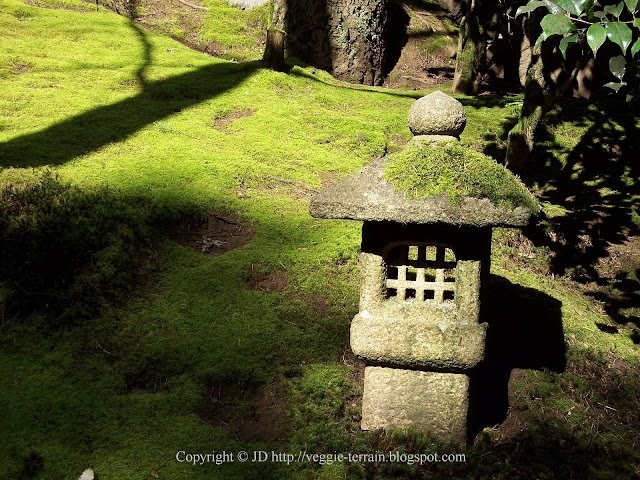 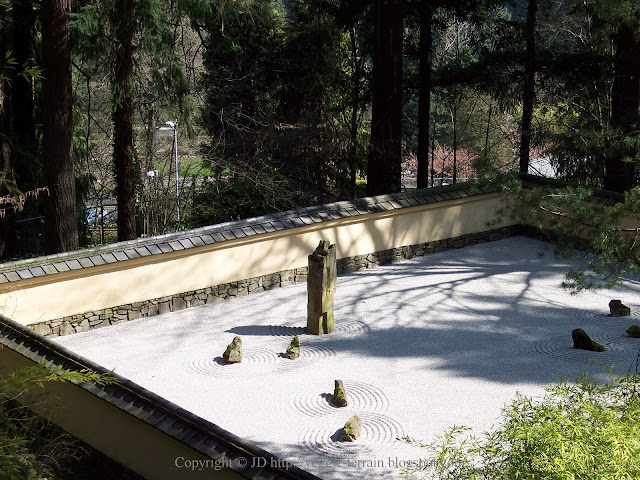 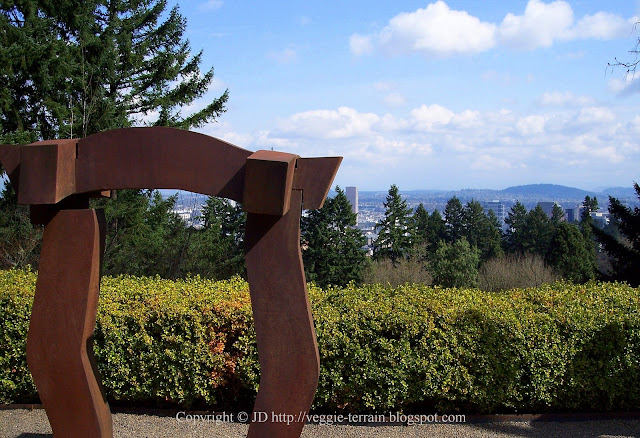 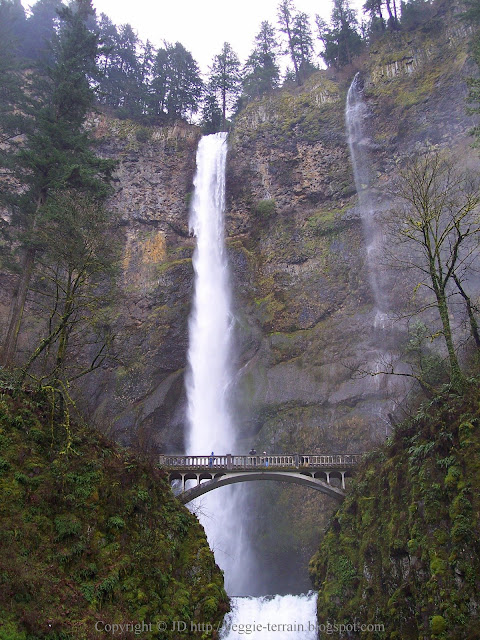 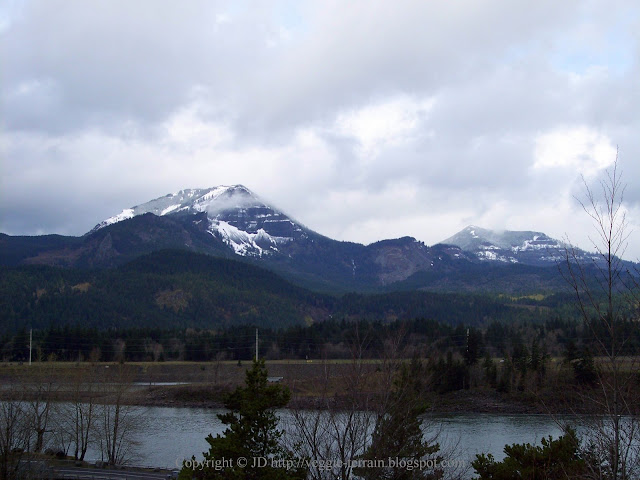 Thanks for humoring me - now let's get back to the food! 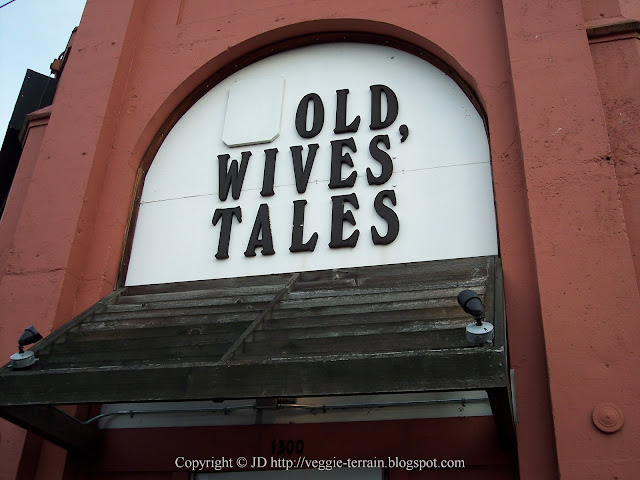 I ordered the salad/soup bar. Pictured below is the soup that I selected (Curry Cauliflower) as well as the salad that I threw together. I really enjoyed the soup, but the salad bar was kind of limited, so it ended up being just so-so. 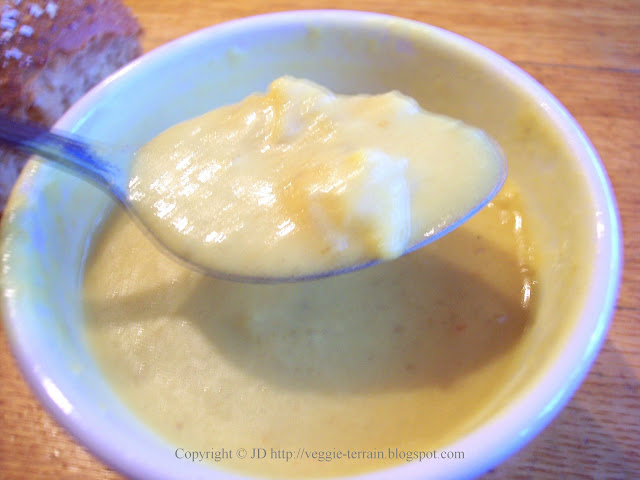 Fifth stop: coffee and dessert! Unfortunately, I can't remember the name of the bakery that we stopped at for cupcakes; however, the name of the coffee shop that we visited was Albina Press.

Despite my lack of memory regarding the name of the cupcake bakery, I can definitely vouch for the fact that it churned out some yummy cupcakes!
The one pictured at the top is called "The Pearl," and it consisted of vanilla with some kind of filling in it (CH's pick). The bottom two are mini-cupcakes - one is Apple Pie Spice (my pick), and the other is Chocolate Stout, which was made with beer from a local brewery. 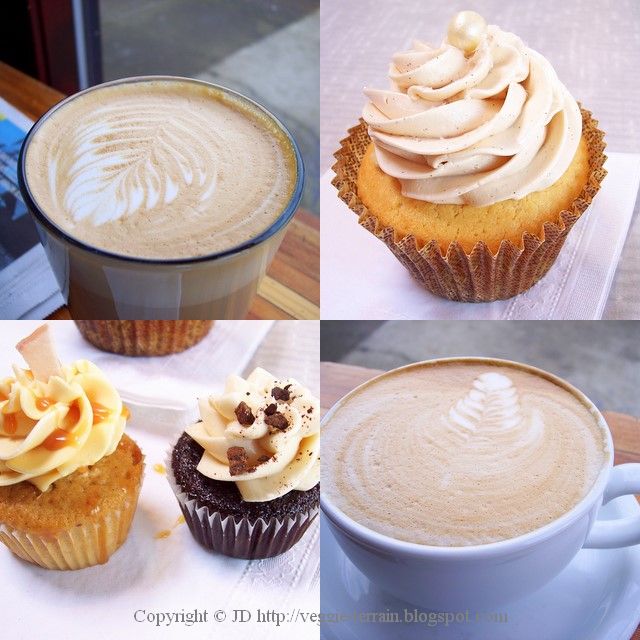 And, although coffee shops are ubiquitous in Portland - saying that they're at every corner is almost an understatement - the strange thing is that CH and I had a hard time finding espresso that was as strong as what we're used to. (Even when we tried Starbucks). Luckily for us though, we finally found Albina, which had fantastic lattes and a cozy, relaxing vibe. Yay!

Sixth stop: The Whole Bowl, a vegetarian food cart in downtown Portland. (Note: there are multiple other locations as well.) 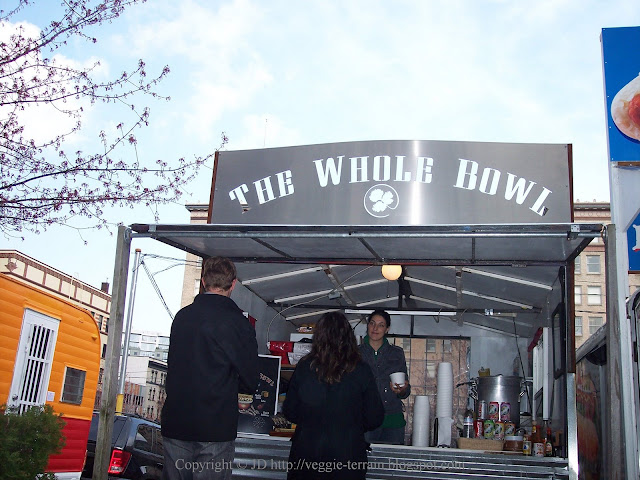 Alright, I'll be honest, I saved the best for last here. The thing is, the Whole Bowl quickly became an addiction of mine (as well as CH's), and we ended up coming back to it more than once.

And, although it struck me as a little odd that Portlanders seemed to patronize "food carts" for lunch - I had a hard time disassociating them from the funnel cake and "elephant" ear stands at the State Fair - I quickly discovered the natives were on to something: cheap and delicious food! 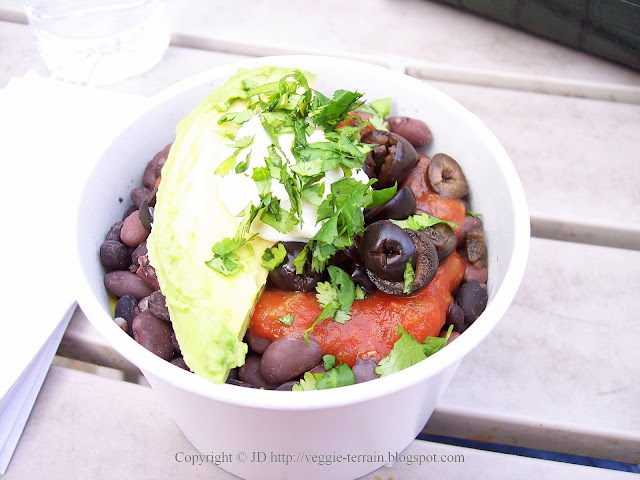 A Whole Bowl consists of brown rice, red and black beans, Tali Sauce, salsa, black olives, cheese, sour cream, and cilantro. (Vegan = without the cheese and sour cream.) The secret - and I do mean secret - to the bowl is the Tali Sauce.

In fact, that's what that yellow-looking sauce is that's visible in the picture below. Apparently the ingredients are very closely-guarded; all that the Whole Bowl crew will say is that the sauce contains lemon, garlic, and other "spices," and that it's both vegan and wheat-free.

(It's also referred to as "crack sauce" quite often - 'cause it's so very, very addictive.) Hmmm... 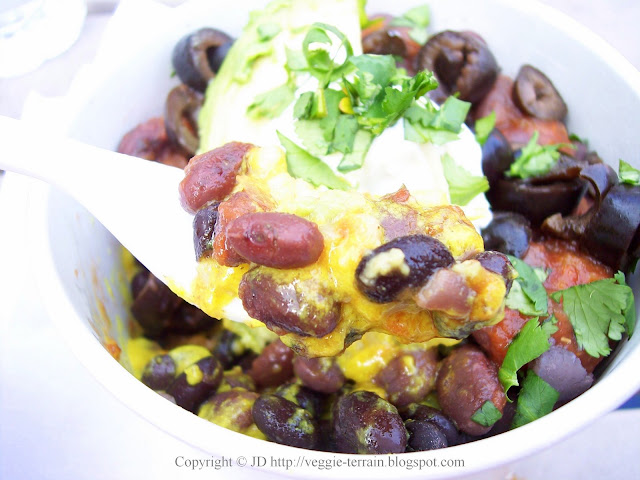 Not surprisingly, I've been driving CH crazy trying to replicate the sauce here at home. And, when (if) I do manage to get it right, I'll post the recipe here - if you're really nice to me that is! Hahaha! Just do me a favor - if you're in the Portland area, send me one of those bowls, okay? I'll pay cash, and you can even have this elephant deliver it to me. 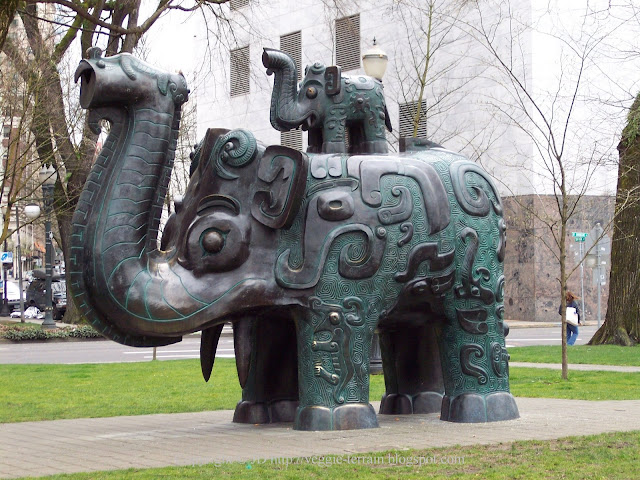 PS I almost forgot to share "The Inside Scoop" from the title of this post with you!

Here it is: While CH and I were eating at Veganopolis, the owner started up a conversation with me because of the law school sweatshirt that I was wearing. She asked if I was from Chicago, and we started chatting a bit. She was really nice and told me some cool stories about when she used to live in the Midwest, and then she shared a little secret with me...

She's planning to open up a Veganopolis in Chicago within a year's time! Now if that doesn't excite you, you either don't leave nearby (sorry!) or you haven't seen their menu/website yet. Check it out here, and start planning your trip! Just don't forget that you heard it here first!
Posted by jd