Start your salivary glands, because it's time for Thursday's edition of Veggie Burger SmackDown!

This week's match-up is between two seemingly fitting foes: "GoodBurger" and "Better Burger," and it's up to this non-boxing fan to determine which one of these restaurants cooks up the superior veggie burger.  Now, before we really get rolling, let's get a few rules out of the way:

Now it's time for the stats:

GoodBurger - This veggie burger looked like, well, a good burger! It came out on a hearty-looking multi-grain bun, stacked high with condiments. And, it managed to convey both health and tastiness, which is a feat, in and of, itself. As an added bonus, the burger even had a little wooden stick holding it together, which added to its rustic charm. Appearance Points: 5

Better Burger - Er, what can I say? Compared to GoodBurger, this was kind of a let down. However, the veggie patty, itself, looked good - thick, with obvious signs of veggies. Plus, if you're a fan of the "fast food" motif with a health'd up twist, look no further than that classic, sesame seed bun. Appearance Points: 2

Texture:
GoodBurger - The veggie patty had a slight bit of crunchiness on the outside, but was quite mushy on the inside. Only a few pieces of the burger fell off while I was eating, which can be a big problem for veggie burgers. However, the fact that burger's texture could play against the heartier bun was a plus.  Also, I liked being able to identify several different kinds of veggies in the burger. Texture Points: 3

Better Burger - Once again, this patty was a bit crunchy on the outside (more so than with the one at GoodBurger), but was mushy on the inside. It held up a bit better than the challenger, but only marginally. Moreover, the fact that the bun was of the "wimpy wheat" variety didn't do any favors for the overall texture of the burger. Texture Points: 2 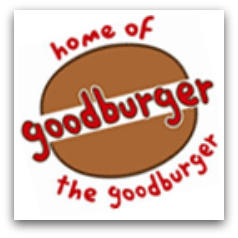 GoodBurger: I liked the fact that the patty was straight-up veggie (no meat imitation here), and enjoyed being able to distinctly taste the carrots, corn, and peas in the burger. I also liked the use of green leaf lettuce and reasonably fresh tomatoes as condiments. I'm a fan of pickles on my burger, but these were a little sweet, which kind of distracted from the burger. Overall, I'd say that GoodBurger is a fine option, but I'm not sure that I'd actively seek it out. However, my standards might have been elevated a bit too high based upon the burger's stellar appearance. I'm still not completely blown away though. [The fries were good -  standard fast-food type fries, but good.] Taste Points: 3

Better Burger: This place might want to rename their veggie burger the "Celery Burger" since celery's all that I could taste while eating it, which was a bit weird. Moreover, the toppings on this burger were lame! The lettuce was iceberg, the pickles were sweet (WTF's with you and the sweet pickles, New York?!), and the onions weren't exactly fresh-tasting. Plus, the wheat bun tasted like it came right out of a Wonder Bread package. While I do have to give Better Burger props for trying to do things right - they have interesting (though icky, in my opinion) condiments like Cajun ketchup, and vegan 1000 island dressing, and use organic ingredients - it's still not enough to win me over. [The fries were terrible, too! Who cares if they're "air-baked" if they taste like mushy potatoes?] Taste Points: 1


*Full disclosure: GoodBurger also has a "Portobello Burger" available, which I suspect might be vegan. However, I didn't check because, frankly, I just don't swing that way.

Have you tried the veggie burgers at either of these places? If so, what was your opinion? What do you look for in a veggie burger? Are there any deal-breakers (besides animal products, that is)?
Posted by jd